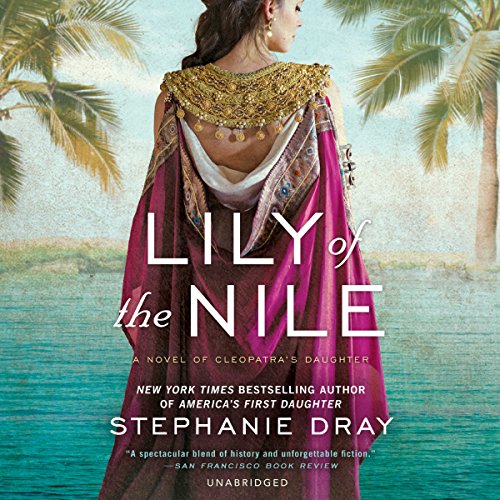 Lily of the Nile

By: Stephanie Dray
Narrated by: Kyla Garcia
Try for $0.00

The extraordinary daughter of Cleopatra and Mark Anthony seeks to reclaim her birthright in the first novel of an epic historical fiction trilogy from the New York Times best-selling author of America's First Daughter.

With both of her parents dead, Princess Selene and her two surviving brothers are left at the mercy of their captors, taken from Egypt and put on display as war trophies in Rome. Trapped in an empire that reviles her heritage and suspects her faith, Selene struggles for survival in a court of intrigue. She can't hide the hieroglyphics that carve themselves into her hands nor can she stop the emperor from using her powers for his own ends.

Faced with a new and ruthless Caesar who is obsessed with having a Cleopatra of his very own, Selene is determined to resurrect her mother's dreams and succeed where she failed. But there's no telling what success will cost her in a treacherous political game where the only rule is win or die.

What listeners say about Lily of the Nile

I have always enjoyed history and fictional stories woven around known facts. Lily of the Nile falls short of my expectations. I loved the premise of following Cleopatra’s children after her death and their experiences in Rome. I thought the plot would be one of politics, intrigue, cultural divides, historical events and interesting characters. Frustratingly the characters were one dimensional and the author barely scratched surface of a storyline.
The narrator is just OK. She reads it as you would to a middle school classroom but I’m not sure if it was the best narration she could pull off with the material she was given.
I am a fan of Philippa Gregory historical fiction so I guess my expectations were high.
Overall, my opinions is this is a YA (young adult) story (without meaning to be). I wish I’d passed on this one & not wasted almost 13hrs! It’s NOT worth the time!

Such a great story about a fascinating character in history. I loved the tie of the idea of early Christianity coming from the isisiac religion. Well told well narrated and looking forward to the next book in the series.

starts slow so you think you may not be able to finish it, but ends amazing and is a great story! Excellent narration, superb story. Can't wait for the next book!

I am looking for the next adventure with this young queen. Many questions, what happened to her brothers? Will Ceaser keep his word?

nice story, but historically not accurate time line. would have liked all children includi
included in it

I really love historical fiction and I loved this book, it was very interesting and well written! I got this book because it was free, but I am definitely paying to listen to the sequel! Nicely done!

love the way this story surrounds you in lush historical fiction. ready to read the next installment

It was disorienting and a bit too dramatic and drawn out.

I had little expectations, but it somehow managed to actually be worse that I had hoped. The written is good but a bit mediocre in my opinion. I blame myself for having such high expectations, it was entertaining, I’ll give it that.

A history & culture I know so little about

I enjoyed listening to this and learning about a part of the world and history I do not know much about. In my opinion, the only drawback to the story was the "magic" aspect which weighted it much more towards fiction than history.

From point of view of Cleopatra's daughter

The research done is obvious. The author knits historical events into the story. Storyline was ok, however, the narrator was forgettable. I wouldn't go out of my way to read this again.