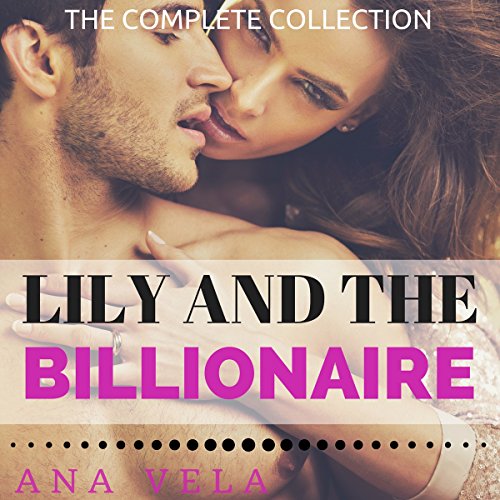 Lily and the Billionaire

By: Ana Vela
Narrated by: Afton Laidy Zabala-Jordan
Try for $0.00

The complete collection of the Lily and the Billionaire series!

This boxed set includes every Lily story! Follow her journey from beginning to end. You'll get to listen to four full volumes, from her very first meeting with the enigmatic billionaire Edwin through the ups and downs of their relationship to the triumphant ending!

Lily and the Billionaire

Lily Verano came to London, England, to become a painter but instead is working long hours every night in a backstreet bar, and her dreams seem increasingly unreachable.

A fiercely independent woman, Lily immediately resists the approaches of enigmatic billionaire Edwin Waterman. But try as she might, and despite her belief that she could never give herself to any wealthy man... she cannot ignore the fact that in his presence the world seems to open up before her.

Is she falling under his powerful spell? Will his ways win her over?

What listeners say about Lily and the Billionaire

I really do not like leaving bad reviews but I tried really hard to get into this but couldn’t get past 2 hours.

Would you consider the audio edition of Lily and the Billionaire to be better than the print version?

OHHHH YES! This audio was a great deal better. Scenes were alive and well audioized. The narrator def brought the title to life and got me excited about hearing Lily find herself to the end.

He voice was on point. Her acting/narrating skills made the book come alive!

Yes, I had a reaction alright! It was down below if you know what I mean.

This was quite a good story and would have been a hundred times better if the narrator could actually read! She was terrible.
She couldn’t seem to read big words bless her, she sounded like she reading at a Year six level, and as for the English words like the Thames is pronounced with a silent H there for saying Tames! She totally ruined the story for me which I might add was very entertaining. So I’m sorry for the narrator bit, but you do ask for honest reviews.