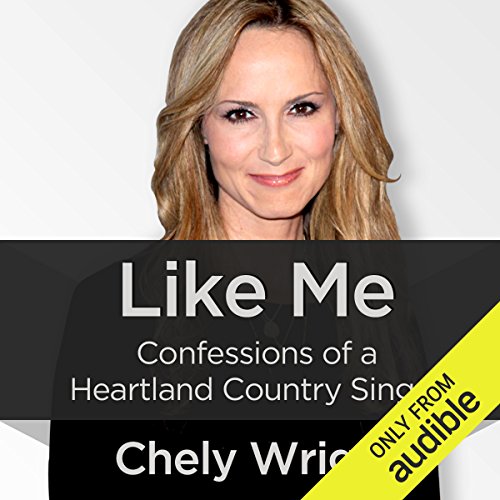 By: Chely Wright
Narrated by: Sarah Zimmerman
Try for $0.00

Chely Wright, singer, songwriter, country music star, writes in this moving and telling memoir about her life, growing up in Kansas City, the youngest of three children, making up her mind at a young age to become a country music star, making a pact with God - to keep her "sinning" to a minimum if he'd just get her to the stage of the Grand Ole Opry. . . We see her, a featured vocalist at seventeen on the Ozark Jubilee (the show that started Brenda Lee, Red Foley and Porter Wagoner), being cast in Country Music U.S.A., a popular show in Opryland U.S.A., being asked to perform at that young age on the stage of the Grand Ole Opry. . . She describes writing and singing her own songs for producers who'd discovered and recorded the likes of Reba McEntire, Billy Ray Cyrus, Shania Twain and Toby Keith ... signing her to a record contract with PolyGram, releasing her first album. . . sending her on her first tour bus, hitting the road, her music on local radio stations; her videos on TV; being showered with critical acclaim, awarded the Academy Of Country Music's Top New Female Vocalist. . . her first hit single, Shut Up And Drive. . .her songs (from her fourth album, Single White Female) climbing the Billboard chart for 29 weeks, finally hitting the #1 spot. . .

She writes about the friends she made along the way - Vince Gill...Brad Paisley and others, collaborating together, recording and touring together, some of the friendships developing into something more and not ending happily. . .

She writes about her drive that spurred her to write more hits, make more videos, produce bigger tours. . . how she was chosen as one of People's 50 Most Beautiful People. . . given the Humanitarian Award. . . named FHM's Top 20 Sexiest Women In Entertainment. . . appeared on the cover of USA Today. . . How, instead of breathing a sigh of relief, she writes about the terror she felt at losing everything she'd worked so hard to create. . .

And after, in the face of everything she did to ward it off, she writes about how the vortex of success took its toll; her life, a wreck she refused to see coming, and finally, how she found the guts to untangle herself from the image of the country music star she'd become, an image steeped in long-standing ideals and notions about who - and what - a country artist is, and what their fans expect them to be. . .

She writes about this time of life and death renewal, how she has come to terms with who she is, and how she has found a new voice in her music; with music flowing naturally from her that never came so easily.

Like Me is a book of revelation; fearless, inspiring, true

Living a secret life for so long was hell for Chely. She really lets you in on all the twists and turns along the way and how it almost led to suicide, literally. I was absolutely amazed at her honesty and courage to share it with the world. I think her story has really made some people think very hard and to review their core beliefs about gays. This is an amazing and important story!!!

A deeply personal memoir that was greatly revealing. Stories of childhood abuse and of the way she used men to hide her sexuality. Though denying she did so purposely; she knew she wasn't attracted to men, she still dated and slept with them. Having the knowledge that coming out would end her career in Country Music she hid the truth about her sexuality. In a way that was poignant and moving, she is open and articulate about her family and relationships. An excellent listen.

Cheeky wright does an excellent job of telling her story which is much like the story of so many others...

It pulled me in from the beginning. So much of her story resonated with my journey and I found it inspiring.

Such a heartfelt coming out story

Chely was such a brave soul! She lived uer country music dream, but had to sacrifice her true self in return. I'm so proud of her journey!!! A wonderful book that I truly enjoyed!!!

This was a very truthful book, very real. I appreciated the honesty of this book.

I LOVE THIS BOOK, ITS TRUE BIO AND HUMOROUS ❤️

This book is priceless, it’s like describing myself as a born lesbian but without the fame of a star! I recommend women or gay people read this book. It’s inspiring and courageous!
I don’t think there is a book in this world like this one. It would encourage gay people to come out if they have not come out of the closet . People who are not gay should read this book so that they can try and comprehend that being gay is NOT a choice. I can’t speak for Bi-sexual people or other people who identify themselves with being “gay” but exploring their sexuality. I believe there are people who will find this book useful in “identifying” their true sexuality.
Gay people who are born this way will know from an early age what their sexuality is because no one can force anyone to have feelings that they don’t or can’t have towards a sex (male or female) because they are gay.
It’s hard for some of us to come out to family and friends for fear of losing that relashionship. I have been there and it’s not a way to live because we suffer not being able to love freely without critisism from homo-phobic people who label gay people as being “sinful” This is false belief that God hates gay people. I am still a gay woman and an active Christian. I will not allow people to push me out of being religious or praying and loving God. God is good and he loves all of us gay or not! It don’t matter what color we are either, God loves us all including non Christian believers and he does NOT punish Gay people who are born this way.

A story from the heart

I have always loved biographies. As a little girl I would check every single one out that the library had. As an adult I find myself searching for them on audible. Some of my favorite books have been biographies. I recently met Chely at our small music venue in Texas. I work all day and have heard hundreds of shows so I often leave as the artist goes on at 8. Something drew me to stay and her voice was beautiful, she connected with the audience in such a genuine personal way. I had to know her. So the following day I downloaded her book and just completed it. The story is real and it taught me a lot. I feel everyone could benefit from the telling. I only love and admire Chely more after listening to it. The reader does an incredible job. I had to keep reminding myself it wasn’t Chely. She is a song writer and that makes her book even more enjoyable. I hope she will write another one in about ten years!

Very sad to know the things she went through growing up and having her career cut short for telling her truth. We should treat all equally no matter what leave the judgment to God or risk judgment yourself.

I don’t normally read biographies but after experiencing Chely live in concert, her fun, thoughtful conversation and music I wanted to read this book. And I’m so very glad that I did. Her sharing helped me understand myself and many of my experiences. Thank you for sharing Chely.