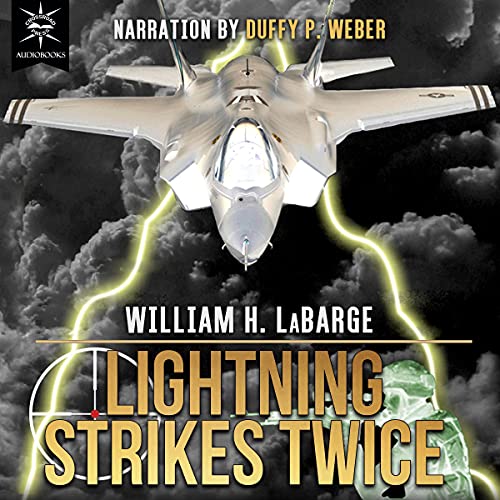 From William H. LaBarge, author of four national best-selling books and coauthor of Aviation Book of the Year Sweetwater Gunslinger 201

The news is grim. Benjamin Netanyahu, the prime minister of Israel, has threatened to attack Iran if they don’t stop enriching uranium. United States' interests back the threat. In LaBarge’s latest novel, Lightning Strikes Twice, US Navy pilots, aboard the USS Ronald Reagan (CVN-76), Captain “Sweetwater” Sullivan and LT “BigHands” Johnson, are called upon to carry out the impossible mission of deterring the Iranian threat under daunting circumstances.

Lightning Strikes Twice is a action-packed story dealing with today's current events. The covert operation during the story is called Rolling Thunder. The story deals with the Bushehr Nuclear Plant in Iran, the newest stealth fighter F-35C, the CIA, Navy SEALS, an unmanned aerial vehicle, the world's longest sniper kill-shot, and an SSGN nuclear submarine with the SHED. This electrifying story is bigger than today's political winds on Capitol Hill. The F-35C has the most-advanced integrated senor-fusing technology and multispectral electro-optical targeting capability in the world. This jaw-dropping story is a fast-paced political thriller.

"In Lightning Strikes Twice, Bill LaBarge shares his life and experiences in naval aviation, both the spell-binding operations and the bawdy life ashore, and projects those forward through the eyes of the commander of the Air Group on the USS Ronald Reagan. What follows is a fictional military response to the nuclear threat from the Iranians, and a story of the warriors, their courage, and their sacrifices and brilliance in execution - all this while coping with the nastiest elements of the environment while landing on Reagan in storm-tossed seas. A story that could someday prove to be more truth than fiction." (Vern Clark, admiral, USN, ret.)