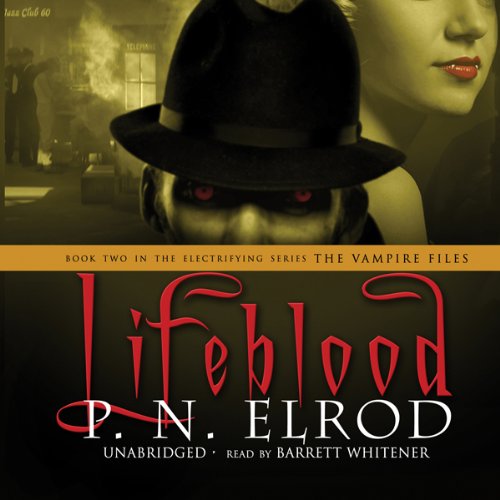 Jack Fleming was an investigative journalist in Prohibition-era Chicago until he got shot by an unknown assassin, bitten by his vampire girlfriend, and then became one of the undead. Now, this nice-guy nosferatu has a bunch of crazy vampire hunters on his trail, armed with crosses, silver bullets, and sharp wooden stakes.

He doesn't know how they found out about him or why they are "out for his blood," but it's not a problem for this street-wise gumshoe, until someone starts shooting. Jack himself may be bulletproof, but his friends are not. And Jack is determined to get some answers, even if it kills him - again. It's a case of the living versus the undead. But who's hunting whom?

"Elrod s got it down. A blend of the hard-boiled detective novel and the vampire tale...good-natured fun." ( Locus)

What listeners say about Lifeblood

Not as good as the first, but still pretty good

The title says it all. The novel is good and entertaining but just lacks a bit of the grittiness of the first novel. We do get to learn more about the main character and some of the past of the woman who made him a vampire. This one is a lot less dark and a lot more predictable than the previous book, hence the lower rating .

You could read this one as a stand alone but it will be more enjoyable if read following the first novel. Once again, the main character is pretty much the only supernatural element of the story. That's not a bad thing, just how it is. The main character does come off a bit more sappy and weak than in the first one but still makes a good main character. I hope the author toughens him up a bit in later stories.

Alll in all, it is still a very good book and definitely worth a listen. Just be aware there are about 12 novels in this series so if you get hooked you may be buying a lot of books. ;)

Kinda drags along.......then ends abruptly. Seriously disappointed after plowing through the drudgery, only to have such an incomplete ending.

I started listening to this book about a week ago, which just so happened to be a very busy week so I wasn’t able to devote much time to it, but last night I was determined to finish it.

This pains me to have to say this, but, the book was s-l-o-w and I’m guessing this was deliberately done to set the mood. However, it was too slow and I was disappointed with the main character, Jack Fleming he was excruciatingly dumb I was hoping that at some point he would wise up and and find his brain and act accordingly, maybe use some of those investigative talents he boasted about.

Better than reading it

I started reading this series in the 90's. I still have the first 5 books in paperback. I love that I can listen to this series now while I do other things. If you haven't read the series and you like Chicago history I think you will enjoy these stories.

So enjoying this series

I was turned on to this series from a short story. I like the variation of just enough supernatural to make it believable. I'm especially glad that I can binge to catch up! Onward!

I love vampires and I love suspense, P N Elrod does a wonderful job of combining both. Terrific book and I can't wait until you get more of the Vampire Files on the site.

One of the best urban fantasy writers.

Raymond Chandler crossed with Charlaine Harris, with an original twist all her own. P.N. Elrod brings '30's Chicago to life, by throwing Death into the mix.

Do you like your bbq sauce thinned out with water? Then you will love this series. I read the first book and got frustrated enough that I put it down in irritation., but eventually I finished it. I thought perhaps the series may improve. It had potential. I mean Chicago in the 1930's? Vampire? What fertile soil for great characters, scenes, atmosphere and storytelling. Nope. The characters are weak. Chicago in that era? Ignored. It is soooo inconsistent. Let me get this right.....super stregnth and speed? Got it. Ability to dematerialize at will and move about invisbly? You bet! Use those skills to fight off the badddies? Well, sort of. The MC gets beat up and shot constantly. Yet with a little strategy ( or a less lazy writer) the MC could easily overpower his foes. He doesn't. Like ever. The author often has him at the mercy of muggers, gangsters, smaller opponents, toddlers, kittens and weak prose. This is practically young adult stuff. I don't read vampire books, in general. I have only recently been delving into urban fantasy, and I like it. If you, like me are just now discovering that genre, there is some good stuff out there. Like The Dresden Files, which is one of the best series ever. No joke. Where the Dresdan file has characters you more than care about, you grow to love them. This book and series? I don't care about anyone. Dresden has fights against the baddies that are complex, exciting and very well thought out. It has a bold, rich flavor. This series' first two books are watered down and unsatisfying.

AND I THOUGHT MR FORBES IS A FOOLISH WANNABE WRITER! Forbes is a literary genius in comparison to this hack scribbler!!!

What a total collaboration of ridiculousness, ignorance, arrogance, mental instability and sheer stupidity from the brain of a janitor who thinks he can write. This book makes me wanna shoot myself! This author should be imprisoned for abusing the eyes and ears of its readers!!

Really enjoyed the second book of the series, even the narrator didn't grate on my nerves as bad as he did the first book. You find yourself wanting to hear more. Good story and plot line!

Would you listen to Lifeblood again? Why?

Yes ....Good story telling through out.

What was one of the most memorable moments of Lifeblood?

Good twist at the end...

Have you listened to any of Barrett Whitener’s other performances? How does this one compare?

i have listened to this audiobook more then 20 times on my partner's account. I love it and am now purchasing for myself. P n elrod is emazing and listening to jacks adventures is the highlight of my days.