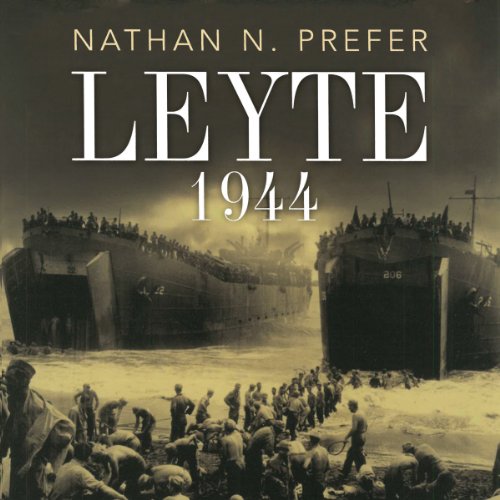 When General Douglas MacArthur arrived in Australia in March 1942, having successfully left the Philippines to organize a new American army, he vowed, "I shall return!" More than two years later he did return, at the head of a large U.S. army to retake the Philippines from the Japanese. The place of his re-invasion was the central Philippine Island of Leyte. Much has been written about the naval Battle of Leyte Gulf that his return provoked, but almost nothing has been written about the three-month long battle to seize Leyte itself.

Originally intending to delay the advancing Americans, the Japanese high command decided to make Leyte the "Decisive Battle" for the western Pacific and rushed crack Imperial Army units from Manchuria, Korea, and Japan itself to halt and then overwhelm the Americans on Leyte. As were most battles in the Pacific, it was a long, bloody, and brutal fight. As did the Japanese, the Americans were forced to rush in reinforcements to compensate for the rapid increase in Japanese forces on Leyte.

This unique battle also saw a major Japanese counterattack - not a banzai charge, but a carefully thought-out counteroffensive designed to push the Americans off the island and capture the elusive General MacArthur. Both American and Japanese battalions spent days surrounded by the enemy, often until relieved or overwhelmed. Under General Yamashita’s guidance it also saw a rare deployment of Japanese paratroopers in conjunction with the ground assault offensive.

Finally there were more naval and air battles, all designed to protect or cover landing operations of friendly forces. Leyte was a three-dimensional battle, fought with the best both sides had to offer, and did indeed decide the fate of the Philippines in World War II.

What listeners say about Leyte 1944

The only thing the audio book is lacking is a map. Frequently I had to consult a map to get the feel of the terrain and distances. Unlike the European theater, which I assume most readers will be familiar with. Leyte is virtually unknown to most. So, get a map and start listening.

A very indepth and detailed history of the Letye campaign. Sadly the narrators delivery was lack luster and comes across like a high school history lecture.

Honestly, I've listened to a lot of WW-II books. This is just lacking everywhere. Anyone can put a book together by reading the Action Reports. There is just very little depth to this book.

It's a history that should be told - bad narration

It's an important story in history. However, the narration is awful. I normally preview a books narration before I start a book, but I jumped into this one because I wanted the subject matter. Unfortunately, the narration is unlistenable. 1/5. Would not recommend. Book version would probably be good, narrated is not good.

While I enjoy war history and think it is important to pass down stories of WWII to our follow on generations, the manner in which this book was written is tough to read. The text seems to be a rehash of after-action reports, both American and Japanese, award citations and command histories with very little other human element or direct quotes from soldiers that were there. While I was excited to pick up this story I was left a little wanting at the end,

it was slow at times, lots of information about the battle but it was like reading a stream of field reports and debriefing text. Very apparent that interviews and personal accounts were few or unobtainable. A fair amount of blame should be placed with the narration. Dry and monotonous.

I didn’t know much about Leyte campaign so glad to learn more. The writing was painful - endless use of passive voice in particular, as the primary example.

I’ve Encountered several military books in the “included” library, fairly short and also short on the historic and geopolitical background and impact, planning, broader strategy, and ugly truths of Clausewitz’ “Fog of War”

These books - including Leyte - have there place and audience, but I’m after a genre more similar to that of Keegan, Toland, Chernow, Tuchman, Bevor etc.

I want to know the human element on both sides, what went terribly wrong, was heavily redacted or declassified, left out of Battle Reports, demonstrated an evolution in weapons, communications, technology, operation, and so on.

Leyte is easy history, Styled around American heroics in battle, as if gleaned mostly from veterans recollections, but before they break dotears. It is patriotic and mildly xenophobic.

But thhe worst aspect of the Leyte war genre is the narration. Are these computer generated audibles? It’s reasonable given the sheer number of books Audible makes available. To there credit, the samples freely offer snippets of the book and narration.

This is a number heavy reading and is better left to book form. The narrative switches back and forth between Japanese and American units erratically and is very confusing. The listing of individuals and their heroism is the only saving grace.

Great Details down to individual efforts

I really liked it, only wish I had a map to see where the story happened to add perspective

This is probably an interesting history which I would have liked to finish. However after the first couple of chapters I gave up. I simply found the narrator too monotonic, uninteresting in voice and impossible to listen to.