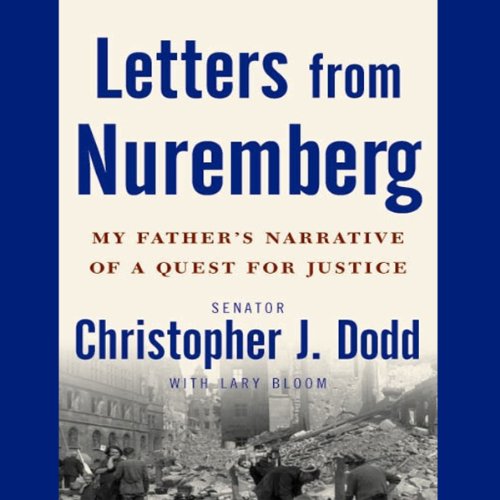 By: Christopher J. Dodd
Narrated by: Michael Prichard
Try for $0.00

Thomas Dodd began his career in public service as a prosecutor at the trials. Chris Dodd recently discovered his mother's collection of letters his father wrote during that time. Through his father, Chris Dodd learned not only the scope of the Holocaust but also the importance of the rule of law. Our World War II allies would have preferred summary executions of the Nazi leadership, but Chris Dodd says his father and his colleagues gave "to these defendants that which they did not give to their victims, and the world is a better place for their example".

"Moving and insightful....Chris Dodd places his father's letters and the trial in context brilliantly." (Senator Edward Kennedy)
"This book is a tour de force: a gold mine for historians, an intimate love story, and a compelling portrait of key Nazi figures." (Doris Kearns Goodwin, historian and author of Team of Rivals)

What listeners say about Letters from Nuremberg

I listened to over an hour of this book, and in that time the author supplies only 3 lines from 1 of his father's letters The first 75 minutes at least has nothing to do with documenting the Nuremberg trials. This book is in fact simply a justification of Democratic Party policies on the war in Iraq, and a position paper to support a run for the presidency.