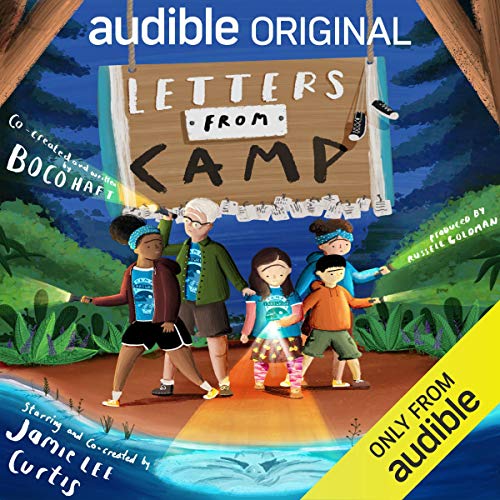 By: Jamie Lee Curtis
Free with a 30-day trial

Our favorite moments from Letters from Camp

Jamie Lee Curtis is an actress, starring in acclaimed films such as the blockbuster True Lies, for which she won a Golden Globe Award; Trading Places, for which she earned a BAFTA (British Film Academy Award) for Best Supporting Actress; A Fish Called Wanda, for which she received duel Best Actress nominations from BAFTA and the Golden Globes; and the Disney feature film Freaky Friday, for which she received a Golden Globe nomination. It was her portrayal of Laurie Strode in Halloween, which was her film debut and brought her to the attention of audiences worldwide. In 2018, 40 years after the original film’s release, Curtis reprised that signature role in David Gordon Green’s record-breaking horror feature, Halloween, produced by horror guru Jason Blum. The second film in the trilogy, Halloween Kills, will be released in October of this year. Most recently, Curtis appeared in the box office hit Knives Out alongside Daniel Craig, Chris Evans, and Ana De Armas for director and writer Rian Johnson. Curtis is also The New York Times best-selling author of more than a dozen children’s books.

Boco Haft (Co-Creator/Writer) is a comedy writer, performer, and producer based in Los Angeles. She was a featured author in Knopf’s True Prep: A Whole New Old World, by Lisa Birnbach, and has worked on television shows including FX’s Baskets, 20th Century Fox’s Family Guy, and Netflix’s Lady Dynamite, and Arrested Development. By day, she runs development for The Hurwitz Company. To date, her highest achievement was receiving the 2009 Junior Varsity Manager of the Year award for her lauded score-keeping in basketball.


Whether you’re getting ready to embark on a cross-country road trip with the whole family or just want a new chapter book to enjoy at bedtime, each superb story on this list is a great place to start. Each a tale of whimsy and adventure brought to life with the help of talented voice actors like Jim Dale, Kate Winslet, Neil Patrick Harris, and more, these imaginative listens—fan favorites, classics, and newcomers alike—are sure to be loved by young listeners. Inspire them to stand up for themselves, speak their minds, and embrace their exceptional uniqueness. Here are the best audiobooks for kids.

What listeners say about Letters From Camp

Had to turn it off

From the cover art, I thought "Letters from Camp" would have been a good listen for my kids. But after ghost stories about killing campers, shaving women's private parts, and wearing thongs, we turned it off and deleted it. Not something I need my 8 and 10 year old boys listening to.

First warning: they aren’t kidding about this being only half a story. This doesn’t end at a cliff hanger or clear stopping point- it just ends after chapter 4. Oh, and I will be sorely pissed if the second half isn’t free.
Update: 2nd half was also free. Not sure why Audible broke it up by two weeks.

Second warning: this isn’t an audio book; this is scripted audio telling a story entirely through dialogue and sound effects. If that isn’t your thing, pass on this book. I very much enjoyed the clearly experienced actor-narrators, who brought awesome emotion, action, and childish hyperbole to this story (female narrators especially rocked the Australian, British, and other accents). The sound effects weren’t overbearing and added imagery where settings or other written details would normally paint the picture.

This is about 11 year old Mookie, a precocious wannabe reporter, stumbling upon a mystery at an 8 week camp for the rich and pedigreed in the summer of 2005. There’s even an actual princess at the camp, complete with bodyguard/servant. Oddly, each kid behaves like a mini version of their parent; Carter diagnoses like his therapist dad, Jenna threatens suit like her attorney dad, and yes, Mookie sees conspiracies everywhere, even in the Sloppy Joe meat, like her famous “legacy” mom. Mookie was not as endearing as beyond his years Sheldon Cooper (from Young Sheldon of Big Bang Theory). Instead, Mookie seemed to me like a cross between Family Ties’ Alex P Keaton and the two Lindsay Lohan twins in the Parent Trap remake; Mookie was uptight and too focused on politics and other adult concepts to enjoy being a kid, making her more annoying and less relatable than a tween protagonist should be.

Final warnings: There’s a handful of sly political references about the Clintons & semantics, VP Cheney, and a rap about Bin Laden. While I was a bit concerned about the mention of “pubes” in the Audible Monthly summary, the actual audio was tamer, with some barely Judy Blume level references to the merits of push up bras in Erin Brokovich and camp girls shaving armpits and “other parts.” There was also a weird riff where a camp counselor gives an over-long, repeated admonition about how the kids needed to go inside (of a museum) and only touch themselves. I don’t think it was intended as sexually cringe-worthy, but it gave me pause. I think these things will go over tweens’ heads. I’ve decided to wait and listen to the second half to be sure, but at present I think I’ll end up approving this for my tween.

Loved this! Reminded me of my Nancy Drew stories from many years ago!! Great job by all! Can’t wait for the next segment, and more Mookie!!!!! 😊

Read along with parent

Cute story, best listened to with an adult present that is fully engaged. One boy has 2 fathers and the lead girl has none. You may want to explain this to your young kids considering the target age group of this audible.

Just What I Needed

Fun and funny!. Mookie's 11, smart and doesn't quite fit in. Sprinkled throughout are amusing IRL references: Brian Williams, NYT, Milkshake etc. This is just the perfect escape. Looking forward to Part 2!

The only positive thing I can say about this is that the narrators were all very good. The plot is terrible, there's very inappropriate themes, children cussing. There's no way I would let my children listen to this.

Spoiler alert for conservative parents: there's a child with 2 dads, there's a lot of inappropriate political talk IE bashing on former President Bush...now I was not a huge fan of the man myself but I really think this trend of bashing on any President is extremely inappropriate. When I was growing up Clinton was in office, and although he was and still is very scummy I was always taught that he is the President and the office is still to be respected. When you let children talk foul about authority figures they grow up having no respect for anyone and the result is youths running amok and burning down cities :I
Also, the "mystery" she's looking to solve is that the girl who went missing 20 years ago turned into a trans person that still lives at the camp as a man.

I only listened to this horrible audiobook to the end so I could warn parents that possibly wouldn't want their children listening to trash like this.

Kids & Grownups both love this!

This has been a great family listen. My 12 and 14 year old loved this and wish every audiobook was this clever and fun. Lots of jokes for kids and adults, excellent performances by the entire cast, great sound design! If I could give this more stars, I would.

What a fun, interesting, and captivating story! I was hooked right away. The narration was awesome. I couldn't wait to find the answer to the mystery of the story. So good. Everyone was spot on. I must admit, I was a bit disappointed in the ending.. it felt like a cliffhanger! is there more to come??

One of the reasons I got this was the fact that it was kids at camp. I'm only on week 5 and there have bee several comments on politics. :0(