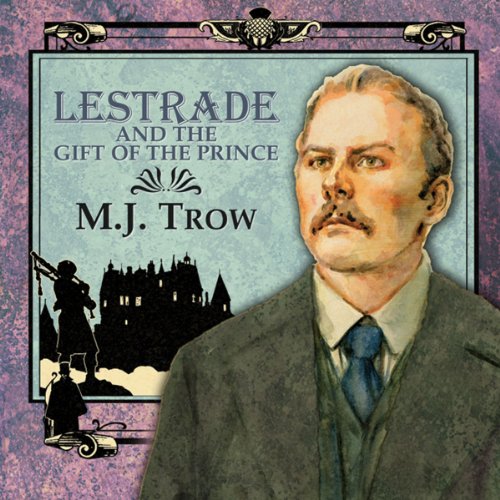 Lestrade and the Gift of the Prince

Murder is afoot among the footmen of Britain's Royal Household: a servant girl, Amy Macpherson, has been brutally slaughtered. And so our hero, Sholto Lestrade of Scotland Yard, is once again on the trail of mystery. As he tries to untangle a villainous web of conspiracy, the superintendent must venture north to Scotland.

His investigations take him from Balmoral Castle to the Isle of Skye to the North British Hotel, where he narrowly escapes an inferno in Room 13. The intrepid investigator contends with the most baffling clues he has yet encountered. But even when Lestrade is threatened by a fiendishly gruesome killer, he perseveres to get his man.

What listeners say about Lestrade and the Gift of the Prince

This was a good immersive story. Most of the story unfolds in Scotland, and although the accent at times is distracting, the mystery more than makes up for that. The Author does a very good job of voicing all of the characters, male and female. Although I became a little lost in the explanation of the reason for the crime, as a whole, I was constantly guessing the identity of the killer, and was satisfied with the finale. Considering the compelling details of the surroundings and character development, I will definitely listen to another Lestrade Adventure.

love this series. haven't had a bad one yet.
the famous person in this one is Rudyard kippling.
recommend all these books.

I wanted to enjoy this book but as a Scot I found the false accent and ridiculous pronunciation so irritating I almost gave up listening to it. Attempts at humour (of which there are a lot) was simply just corny could not even rise a groan

Has Lestrade and the Gift of the Prince put you off other books in this genre?

For the time being

Ridiculous accent and pronunciation of the simplest Scottish words, a little research could have helped with this

To experience all books in this series this one has to be endured (or maybe its me). As a stand alone book, I would steer clear