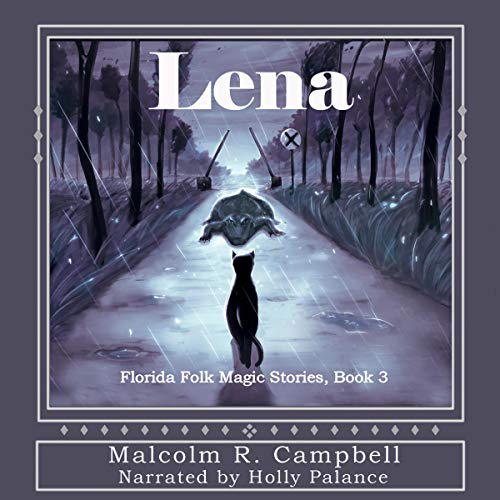 By: Malcolm R. Campbell
Narrated by: Holly Palance
Try for $0.00

When Police Chief Alton Gravely and Officer Carothers escalate the feud between “Torreya’s finest” and conjure woman Eulalie Jenkins by running her off the road into a North Florida swamp, the borrowed pickup truck is salvaged, but Eulalie is missing and presumed dead. Her cat, Lena, survives. Lena could provide an accurate account of the crime, but the county sheriff is unlikely to interview a pet. Lena doesn’t think Eulalie is dead, but the conjure woman’s family and friends don’t believe her.

Eulalie’s daughter, Adelaide, wants to stir things up, and the church deacon wants everyone to stay out of sight. There’s talk of an eyewitness, but either Adelaide made that up to worry the police or the witness is too scared to come forward.

When the feared black robes of the Klan attack the first-responder who believes the wreck might have been staged, Lena is the only one who can help him try to fight them off. After that, all hope seems lost, because if Eulalie is alive and finds her way back to Torreya, there are plenty of people waiting to kill her and make sure she stays dead.

What listeners say about Lena

Very real altercation with a twist

This is the first book I’ve read/listened to by this author and I would try another. It was an interesting tale. This is a complete story, so having not listened to the first two of this series did not effect my ability to follow this story. There is some backstory to the feud that was not recapped in this book , but I’m sure is in the previous books. Much of the story is from Lena’s ( the cat) perspective.

This is the first book I’ve listened to by this narrator ( Holly Palance ) and I would listen to another. She did well with the character voices and accents. Her reading style added to the mystic storyline.

Conjure Woman, a Cat and Detective

The narration of this book was excellent!!!

I came into this book series at the third volume but found instead of feeling lost I thoroughly enjoyed this story. I’m a total cat lady which likes the idea of kitten with crime fighting clues. Dealing with the more serious issues like racism in the South, law enforcement and the KKK within the context of a mystery surrounding the death of a southern Florida Conjure. Although I thought this was a good book I doubt I will continue with series. The book was shorter than most of my reads & I prefer a lot more depth.
This book was given to me with the hope I would give an honest review. I recommend that you give any of these books a chance and maybe you’ll love this series.

Great narrator but not quite my cup of tea

This isn't a bad story. Just not quite my style. I went in wanting and expecting to like it but somehow couldn't really get into the story. Holly Palance did a good job as a narrator capturing the accent of the area and bringing the characters too life. I'm not sure why this story didn't click for me. I enjoy southern stories and I like stories with magic. From the description, I suppose I was expecting more magical realism and less psychicly talking with magic cats. Also, with it being such a short story, it was frustrating hearing the same conversations two or three times.
I was given this book for free in return for a review.