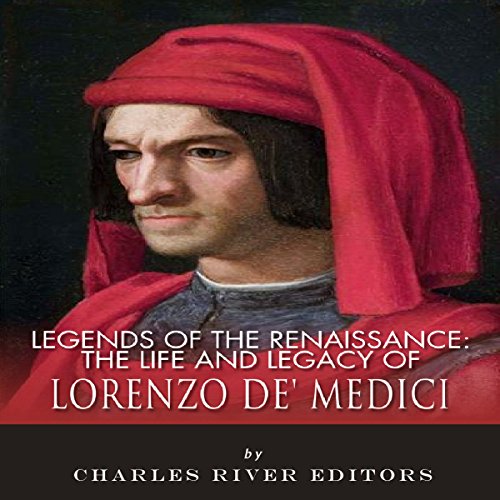 Legends of the Renaissance: The Life and Legacy of Lorenzo de' Medici

By: Charles River Editors
Narrated by: Christopher Hudspeth
Try for $0.00

Discusses Lorenzo's relationships with other famous Renaissance legends, including Leonardo and Michelangelo. Includes a bibliography for further reading.

"How beautiful is youth that is always slipping away." (Lorenzo de' Medici)

A lot of ink has been spilled covering the lives of history's most influential figures, but how much of the forest is lost for the trees? When historians are asked to pick a point in history when Western civilization was transformed and guided down the path to modernity, most of them point to the Renaissance. Indeed the Renaissance revolutionized art, philosophy, religion, sciences, and math, with individuals like Galileo, Leonardo, Michelangelo, Raphael, Dante, and Petrarch bridging the past and modern society.

In Charles River Editors' Legends of the Renaissance, listeners can get caught up to speed on the lives of the most important men and women of the Renaissance in the time it takes to finish a commute, while learning interesting facts long forgotten or never known.

Most historians credit the city-state of Florence as the place that started and developed the Italian Renaissance, a process carried out through the patronage and commission of artists during the late 12th century. If Florence is receiving its due credit, much of it belongs to the Medicis, the family dynasty of Florence that ruled at the height of the Renaissance. The dynasty held such influence that some of its family members even became pope.

Among all of the Medicis, its most famous member ruled during the Golden Age of Florence, at the apex of the Renaissance's artistic achievements. Lorenzo de' Medici, commonly referred to as Lorenzo the Magnificent, was groomed both intellectually and politically to rule Venice, and he took the reins of power at just 20 years old.

What listeners say about Legends of the Renaissance: The Life and Legacy of Lorenzo de' Medici

This tidbit of history is very interesting, but the narrator's consistent mispronunciation of people's names would actually be comical, if it wasn't so irritating. He pronounces just about everyone's name incorrectly, except for Lorenzo! By the end, I was actually surprised that he got that one right!

I have to agree with the other review. The pronunciation of names is so blatantly incorrect that it makes it impossible to listen to. I gave up when the narrator pronounced Bologna as Bo-Lowge-Na. It's also read incredibly fast making any transmission of useful information practically zero.