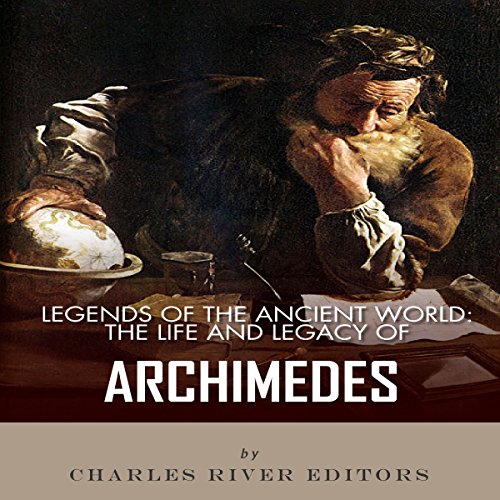 Legends of the Ancient World: The Life and Legacy of Archimedes

By: Charles River Editors
Narrated by: Johanna Oosterwyk
Try for $0.00

Over 1500 years before Leonardo Da Vinci became the Renaissance Man, antiquity had its own in the form of Archimedes, one of the most famous Ancient Greeks. An engineer, mathematician, physicist, scientist and astronomer all rolled into one, Archimedes has been credited for making groundbreaking discoveries, some of which are undoubtedly fact and others that are almost certainly myth. Regardless, he's considered the first man to determine a way to measure an object's mass, and also the first man to realize that refracting the Sun's light could burn something, theorizing the existence of lasers over two millennia before they existed. People still use the design of the Archimedes screw in water pumps today, and modern scholars have tried to link him to the recently discovered Antikythera mechanism, an ancient "computer" of sorts that used mechanics to accurately chart astronomical data depending on the date it was set to.

Archimedes was a legend even among the Romans, who were expanding their empire during the great scientist's own lifetime. A Roman soldier has long been blamed for killing Archimedes after taking over Syracuse, but not before Archimedes reportedly helped the island's defenses with ingenious devices that burned Roman ships and even lifted some of them out of the water. The stories are probably apocryphal, but they speak to the man's reputation even among his contemporaries, and Cicero himself went to visit Archimedes' tomb.

It has long been difficult to separate fact from legend in the story of Archimedes' life, from his death to his legendary discovery of how to differentiate gold from fool's gold, but many of his works survived antiquity, and many others were quoted by other ancient writers. As a result, even while his life and death remain topics of debate, his writings and measurements are factually established and well known, and they range on everything from measuring an object's density to measuring circles and parabolas.

Legends of the Ancient World: The Life and Legacy of Archimedes chronicles the life, stories, and legacy of the famous Greek mathematician.

What listeners say about Legends of the Ancient World: The Life and Legacy of Archimedes

Listening to this narrator is like listening to a never ending disclaimer in a pharmaceutical commercial. Terrible. I will have to read to book myself.

Great information, but the narration sounds so much like a computer, it's distracting. The exact and precise pronunciation and cadence sounds like a computer and you have a hard time believing this was actually read by a human. Distracting.