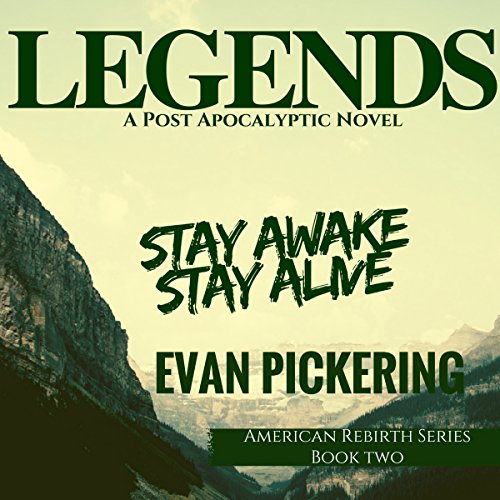 By: Evan Pickering
Narrated by: Michael Jameson
Try for $0.00

Legends never die. Whiskey and Taylor have found a new life as Sons of Liberty Rangers. But the tides of war beckon as rebels are found within the borders. And a mysterious message has been nailed to their door. Someone from their past is still alive. Twenty years have passed since the fall of the Kaiser and the end of the First War. Survivors across the country have slowly banded into factions, rebuilding semblances of civilization from the vestiges of the old world. The end of the Kaiser's war brought years of relative peace to the country. But as the factions rise up against the Sons of Liberty, conflict rises on the horizon. And war never stops. Whiskey and Taylor have found a new home in Boston, capital of the Sons of Liberty. The echoes of Hood's legend carry on in the hearts and minds of the Sons, and Whiskey and Taylor are the last connections to him in the young new world. As leaders of the Liberty Rangers, Whiskey and Taylor must mentor the young Rangers, who know nothing of the world before the fall. More than just how to survive and how to fight, Whiskey and Taylor must teach them Hood's legacy - that there's still good in the world worth fighting for. As war comes again to the vestiges of America, something from their past threatens from outside the Sons' borders. The new civilization stands upon the brink of falling apart once more - and someone from their past is still alive. Sequel to the best-selling Audiobook 1 of the American Rebirth Series, Hood!

What listeners say about Legends

Great 2nd book in Post end of the world series

This was a wonderful addition to this series. There are great characters that you want to follow and find out what is going to happen to them. The part that I really enjoyed about this storyline is that it is such a different approach to the post-end of the world scenario than is so prevalent these days. It focused on the humanity of the survivors, not just surviving and the techniques that you need to know to survive. I hope that there will be many more books in this series.

Whiskey and Taylor have settled in to their new life, but someone from their past appear out of nowhere. Excellent story and narration

Pickering is an incredibly eloquent writer. The prose is just beautiful. The same strong and reliable voice that drew me in for Hood was present in Whiskey/Legends. There are some neat parallels to Hood, too. Thematically the series is tied together well.

The weaknesses in Whiskey/Legends are also similar to Hood, though. Politically the landscape is difficult to make sense of. I needed more of a refresher to book 1, in part because the political structures/groups confused me from the beginning and made even less sense to me in book 2. Decades have passed and there simply isn't enough time given to the big picture since the plot revolves around the big picture. There continues to be plot devices where it's hard for me to suspend my disbelief, and these types of plot holes really irked me throughout my listen - enough to impact my enjoyment of the story.

The narrator is a really great fit for the story. No one in Boston had the telltale Boston accent, but he does a great job of distinguishing characters and really making an effort to make the story come alive with his performance.