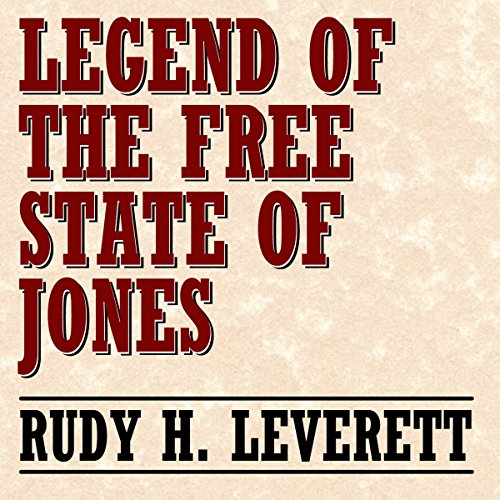 By: Rudy H. Leverett
Narrated by: Claton Butcher
Try for $0.00

The original, full accounting of a rebellion in the Heart of Dixie.

A maverick, unionist district in the heart of the Old South? A notorious county that seceded from the Confederacy? This is how Jones County, Mississippi, is known in myth and legend. Since 1864 the legend has persisted. Differing versions give the name of this new nation as Republic of Jones, Jones County Confederacy, and Free State of Jones. Over the years this story has captured the imaginations of journalists, historians, essayists, novelists, short story writers, and Hollywood film makers, although serious scholars long ago questioned the accuracy of local history accounts about a secessionist county led by Newt Knight and a band of renegades.

Legend of the Free State of Jones was the first, authoritative explanation of just what did happen in Jones County in 1864 to give rise to the legend. This book surveys the facts, the records, and the history of the "Free State of Jones" and well may provide the whole story.

Rudy H. Leverett was born in an unplumbed cabin in the woods outside of Hattiesburg, Mississippi. He had a doctoral degree in education and spent his life writing extensively on the subjects of philosophy and the American South. He died on his birthday in 1999.

What listeners say about Legend of the Free State of Jones

What did you love best about Legend of the Free State of Jones?

I really appreciated the clear diction, inflection and a voice that is easy to listen to.

I like how it presents the facts so people can make their own decisions. It shows how Hollywood and descendants elaborated to make a story to their liking.