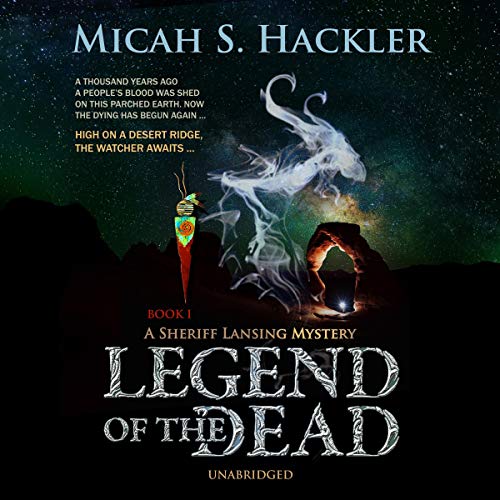 Legend of the Dead

A thousand years ago a people’s blood was shed on this parched earth. Now the dying has begun again.

High on a desert ridge, The Watcher awaits....

The body in the arroyo belonged to a man who’d made his living plundering ancient Indian sites. And the only witness to the crime would not change his story: a demon had killed his friend.

Sheriff Cliff Lansing has an unexplained death on his hands, and it’s only the beginning. In Las Palmas, New Mexico, a US senator is on his way to meet a Zuni shaman who is holding up a land swap involving 150,000 acres in New Mexico and Arizona. Backed by a powerful businessman, the senator intends to push the deal through. But in a long, dark night on the high desert, he is led into a storm of violence and shame.

Now Sheriff Lansing is headed out to the Anasazi Strip, where the truth awaits him—in the swirling dust of magic, greed, and murder.

What listeners say about Legend of the Dead

Thank you Audible Plus

I would never have considered this series even though I loved the early Hillerman years. This series gets better with each installment. It differs from others because the Mysticism is real. Give it a try, you won't be sorry.

Starts off slow but becomes very riveting! Enjoyed it reminded me of a Walt Longmire book.

Everything I was hoping for and more.

I was looking for a series similar to Tony Hillerman's Leaphorn books, and found it and more. The story also reminds me of the Longmire books, but it stands well as it's own 'world'. A great blend of murder mystery and native mysticism, humor and intrigue. Looking forward to the rest of the series!

As the Master story Teller, Micah weaves his story’s Web in and around this particular ancient American historic setting... keeping me glued to my seat, engaged with his Plot!
Thanks for A great story.

Sheriffs shouldn’t be so dumb

I understand that to make a story the character need to go from one idiotic thing to another, but sometimes those kinds of stories leave a lot to be desire. When the leader of a group makes one dumb choice after another, puts his men in harms way & just walks off like nothing happened when his officer(s)are killed because of some last minute thing the author throws in to make the story just another page or two longer - it goes beyond just another lame story.

the narrator was good. the description of the archeological finds was intriguing. there wasn't a lot of character development or description of weather or country.

Storyline was narrated and written well. For being 6-7 hours long. I thought it was pretty good. I wouldn't say it was my favorite but not bad.

The book begins with two drunks out in the desert stealing ancient Indian pottery until one of the men is killed. At first the authorities believe it was an accidental shooting, that the two men were out drinking and one accidentally shot the other. But soon it was evident that could not have been the case. Different caliber, different gun. Sheriff Lansing asks the local doctor to perform the autopsy, a female who becomes instrumental later in the story. A rich and powerful businessman, who believes he has the senator in his pocket is trying to push through a land swap with the tribal nation. But things are not exactly as they seem. When the medicine man asks to meet directly with the senator before the deal can be voted upon, the senator agrees. This is a great first book in the series. I could not stop listening to it, staying up late to finish it. The folklore surrounding the artifacts, the native people, and the area are so interesting. Can't wait for the next in the series.

While the storyline is interesting enough… I find the consistent reduction of the female characters to their sexuality to be distracting. To me it’s a sign of immaturity on the author’s part, if all there is to say about a female character is her sexuality- leave it out.