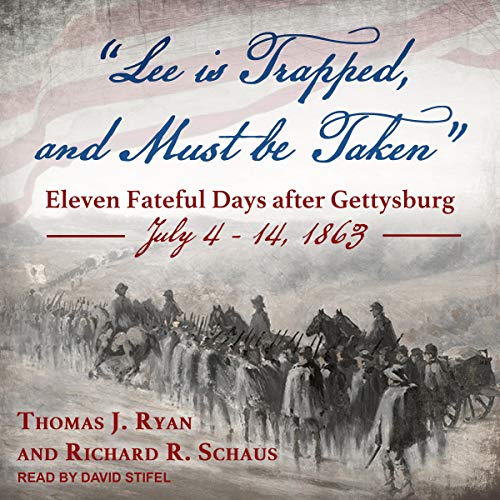 "Lee Is Trapped, and Must Be Taken"

"Lee Is Trapped, and Must Be Taken": Eleven Fateful Days After Gettysburg: July 4 to July 14, 1863 focuses on the immediate aftermath of the battle of Gettysburg and addresses how Maj. Gen. George G. Meade organized and motivated his Army of the Potomac in response to President Abraham Lincoln's mandate to bring about the "literal or substantial destruction" of Gen. Robert E. Lee's retreating Army of Northern Virginia.

The 11-day period after Gettysburg was a battle of wits to determine which commander better understood the information he received, and directed the movements of his army accordingly. Prepare for some surprising revelations.

Woven into this account is the fate of thousands of Union prisoners who envisioned rescue to avoid incarceration in wretched Confederate prisons, and a characterization of how the Union and Confederate media portrayed the ongoing conflict for consumption on the home front.

"Lee Is Trapped, and Must Be Taken" is a sequel to Thomas Ryan's Spies, Scouts, and Secrets in the Gettysburg Campaign, the recipient of the Bachelder-Coddington Literary Award and Gettysburg Civil War Round Table Distinguished Book Award.

What listeners say about "Lee Is Trapped, and Must Be Taken"

So glad to see a deep book like this on audible. Thorough and complete, detailed.