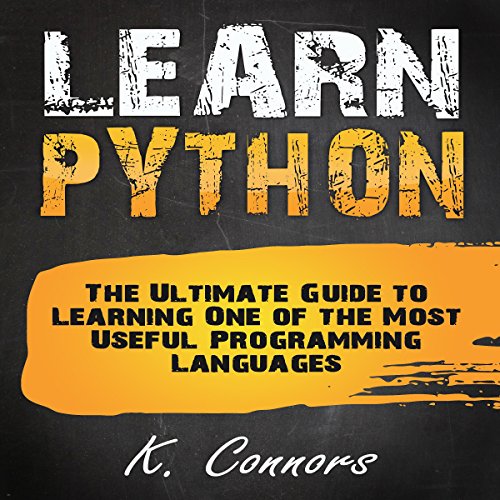 The Ultimate Guide to Learning One of the Most Useful Programming Languages
By: K. Connors
Narrated by: Stephen Strader, The Voice Ranger
Length: 1 hr and 29 mins
Categories: Science & Technology, Technology
4 out of 5 stars 3.9 (9 ratings)

Whether you're learning how to code for the first time, or just trying to add to your programming arsenal, you're in the right place. Python is one of, if not the most, widely used programming language today, whether you're at a large corporation or at home developing a game. It doesn't matter if you're into game development or mobile app engineering; Python is a great choice either way. The structure of the language doesn't require lengthy code to be written, and its comprehensive standard library allows it to support multiple programming paradigms.

In this book, you will learn:

Download Learn Python: The Ultimate Guide to Learning One of the Most Useful Programming Languages and find out why it's the most powerful programming language today!

Although this is a well read and produced audiobook, it has a misleading title.
I purchased this book because I am a beginner that wants to learn Python. What better book to start with than "Learn Python: The Ultimate Guide to Learning one of the Most Useful Programming Languages"....right?
Wrong...this book does not teach Python. Rather, it is about how to chose a programming language to learn, and some compare and contrast of each.
While listening to the book, I kept thinking that eventually it will start to teach some Python, but it never did.
So, if you are interested in learning Python, do not buy this book. If you want to learn a little about program language history and philosophy, buy the book.
I hope this review helps someone not make the same mistake I did and buy this book thinking they will learn Python.

basically nothing to do with Python.

this book teaches nothing about Python. waste of money. just talks about various languages and styles while saying "Python is cool" a lot. I expected to actually learn something about Python from a book titled "guide to learning Python".

as a beginner I like lots of books like this that give me a foothold in the code. I found this to be a very good resource and guide.

I already know several programming languages. I got a software development degree in college. And I have to say, I have NEVER read a development book written so WELL. Mark K. Connors is an INCREDIBLE teacher and an INCREDIBLE writer.

Good book to read,it enhance my knowledge in computer.It can be used on variety of platforms,a comprehensive book on how to program in python.This book explain well the detail,example and with complete details about python and the usage of it.I like this guide,i will continue study it and hope i will master it.Nothing to loose if i try then wish to become expert on it.Thanks to the Author for sharing this book,worth to recommend

Easy guide book to learn the basics on how to code in python. Well written, easy to understand for beginners as well. Also I was able to learn useful Tips and tricks to writing less code. Great helpful book.