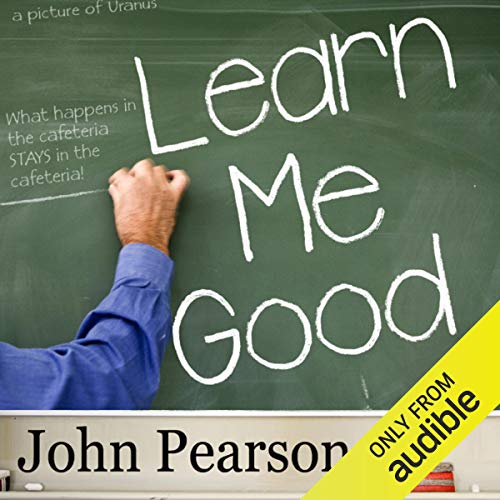 By: John Pearson
Narrated by: Adam Black
Free with a 30-day trial

Jack Woodson was a thermal design engineer for four years until he was laid off from his job. Now, as a teacher, he faces new challenges. Conference calls have been replaced with parent conferences. Product testing has given way to standardized testing. Instead of business cards, Jack now passes out report cards. The only thing that hasn't changed noticeably is the maturity level of the people surrounding him all day.

Learn Me Good is a hilarious first-person account, inspired by real life experiences. Through a series of emails to Fred Bommerson, his buddy who still works at Heat Pumps Unlimited, Jack chronicles a year-in-the-life of a brand-new teacher. With subject lines such as "Irritable vowel syndrome", "In math class, no one can hear you scream", and "I love the smell of Lysol in the morning", Jack writes each email with a dash of sarcasm and plenty of irreverent wit.

What listeners say about Learn Me Good

LAUGHTER IS THE BEST MEDICINE

Where does Learn Me Good rank among all the audiobooks you’ve listened to so far?

I read Learn Me Good a while back and now count Mister Teacher as one of my favorite authors - he makes me laugh out loud, and there are only a handful of authors I have discovered able to do that. I immediately purchased the audible version when it became available - a bit disappointed that the author was not also the reader, but willing to keep an open mind. Adam Black did an outstanding job and at times it was almost like listening to Jean Shepherd - another very funny guy. By the end of the story, I felt like I was with an old friend - the kind who will read you a story and make you laugh - and I was sorry to have it end. I highly recommend this story, as well as Pearson's subsequent books, and this audible version for those of us who remember how it was to have a loving parent read them to sleep at night.

Was looking to learn some insight of teaching , but what I got was a buying joking and making fun of his students . No respect for the students nor his job!