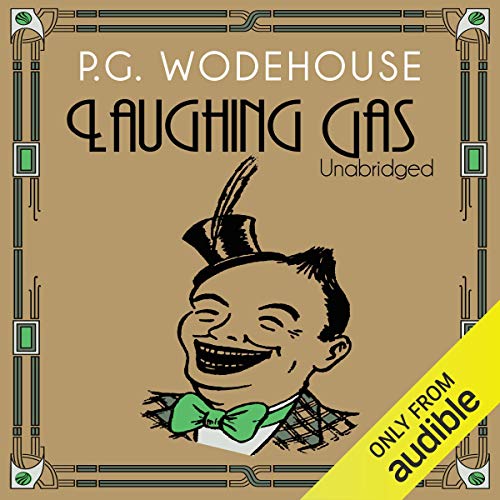 Joey Cooley is a golden-curled child film star, the idol of American motherhood. Reginald, Third Earl of Havershot, is a boxing blue on a mission to save his wayward cousin from the fleshpots of Hollywood. Both are under anaesthetic at the dentists when something strange happens - and their identities are swapped. Suddenly Joey can use his six-foot frame to get his own back on his Hollywood persecutors. But Reggie has to endure everything Joey had to put up with in the horrible life of a child star - including kidnap. Laughing Gas is Wodehouse’s brilliantly funny take on the 'If I were you' theme - a wry look at the dangers of getting what you wish for in the movie business and beyond.

What listeners say about Laughing Gas

very silly, but still a hoot. not sure I'd listen a second too, but fun once

Jonathan Cecil was perfect for this story. He captured the mood perfectly.
It was a fun summer diversion and I enjoyed it very much.

I love Wodehouse's use of language!

Would you consider the audio edition of Laughing Gas to be better than the print version?

I have only heard Laughing Gas, never read it, so I could not compare the print version with the audio. I love the way Jonathan Cecil reads this, though.

Reginald, Third Earl of Havershot is probably my favorite character.

Which character – as performed by Jonathan Cecil – was your favorite?

But Cecil performs Eggy really well. I also like the way he portrays the kid, Joey Cooley.

If you could take any character from Laughing Gas out to dinner, who would it be and why?

Wodehouse's plots are silly, but his use of language is unbeatable.

I was always under the impression that Plum's time in Hollywood was regarded as a failure for screenwriting , but on the back of his he left them with he concept of body swapping situations, a concept used again and again in Hollywood movies. This story is full of classic Wodehouse language, a delight and amusing to listen to, having myself not ventured past Jeeves and Blandings would recommend this to listen to. Jonathan Cecil gets the tone spot on.

The most unexpected and wonderfully written and performed story I have read/listened to in a very long time. Every sentence a work of art and every minute a smile or spontaneous laugh-out-loud!

What made the experience of listening to Laughing Gas the most enjoyable?

The narration by Jonathan Cecil was really very good, and sounded just like I would have read it in my head. The book itself is very good - by any other author I might have given it five stars, but I didn't think it quite lived up to Wodehouse's heights

His 'voices' were great.

Would you consider the audio edition of Laughing Gas to be better than the print version?

I haven't read the print version, but I think Jonathan Cecil's narration is so entertaining that it brought the book to life.

What does Jonathan Cecil bring to the story that you wouldn’t experience if you had only read the book?

I love his different voices and he made the characters real.

I haven't read PG Wodehouse before. This was an excellent introduction. A fun, enjoyable story.

Unusal for Wodehouse, but entertaining

'Laughing Gas' is P. G. Wodehouse's take on the body-swap idea popularised by 'Vice Versa'. While the concept is much more far-fetched than Wodehouse's more familiar work, the book delivers the expected laughs. Narrated with aplomb by Jonathan Cecil.

These stories are classic, timeless, and always hilarious. I've only fairly recently found the books, and I can't get enough of them. I highly recommend this author. Very well narrated by Jonathan Cecil

One of Wodehouse’s less well known stories- undeservedly so as it’s great fun from a writer at the top of his game.

Wodehouse has such a brilliant turn of phrase thar it is always a pleasure. And brilliantly read.

Funny, but not one of P.G's best

This is quite a funny story, but in my humble opinion, it is not one of P.G.'s better books.

Didn't kind of story from the master

I have not heard a story like this from PG Wodehouse before. One that slips into the supernatural. It is of course brilliant as all of his books are. All new characters who I have never seen before. for me Jonathan Cecil is the best reader of Wodehouse.