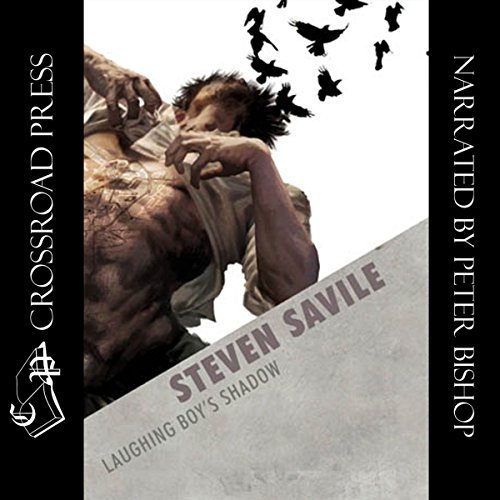 By: Steven Savile
Narrated by: Peter Bishop
Try for $0.00

"My name is Declan Shea. I never thought I was monster.

"My life changed overnight. I was driving home from a gig when a tramp stepped out in front of my car. I killed him. I know I did. But no-one believed me. The medical staff at the hospital insisted he was the result of some sort of hallucination, because of trauma sustained during the accident. I tried to convince them otherwise, but the more I protested, the more obvious it became to them that I had damaged more than just my ribs in the crash, so I started to lie to keep them happy. I pretended he wasn't there. But he was. He was everywhere. And he was determined to destroy my life and take away everything I loved in revenge.

"How do you fight a monster no-one else can see?

"This is what he reduced my life to. I stopped being Declan Shea that night and became someone else entirely. I became a monster."

Laughing Boy's Shadow, international best-selling author Steven Savile's debut novel, charts the descent of an ordinary man into a murky world of very human monsters, grief, and madness as he wrestles to come to terms with who he is and just what he is capable of in the name of love. Published in the US, Sweden, and recently sold to Germany, this is Laughing Boy's Shadow's first appearance in Savile's native land.

"A story about Death written by a man who has clearly consorted with devils.” (T.M. Wright, author of A Manhattan Ghost Story)
"A raw, gritty novel: part social commentary, part philosophy, part fantasy. Savile handles his episodes of graphic violence skillfully, eschewing cliches and shock tactics in favor of understated, detached narration, and the result is a genuinely chilling portrait of total alienation. Savile's novel is original, smart, and well-written; his disturbing images and bleak prose and both thought-provoking and genuinely unsettling." ( Rue Morgue)
"The tale is compelling. The protagonist Declan Shea's transformational journey through the underground; his confrontation with the marvellously named Crohak and the Rookery; the iconic imagery cheerfully interwoven with allusions cribbed from L. Frank Baum, Lewis Carroll and Joseph Campbell make for a dark intriguing sojourn through a mythic urban landscape of bewildering wonderment." ( Fear Zone)

So, to describe this book in a word... the only one that feels like it fits is... wow... This was a hell of a listen. It is dramatic, creepy, gritty... and gripping. It plays along the psychological thriller lines but much darker and chilling. It is narrated well and really makes for an engaging listen. If you are a fan of horror, I would highly recommend this book.

Let me start by saying that this is another one of those stories (just finished one) in which it’s just so good and different, but there are barely any reviews, meaning not many people have had the privilege of reading or listening to it. That’s so sad! And I just looked at the Amazon listing for it, and there’s no cover photo! ☹ It's like these great stories just get swept under the rug.

Anyways, I love the title. It’s just so unique, just like the story itself. This is one of those stories that isn’t my usual cup of tea. So, when I go about reading/listening to something different, I’m always surprised when I finish and like it. I don’t know why, but yeah…

If you’re looking for an attention-grabber, gets-your-brain-thinking, pulls-you-in-and-doesn’t-want-to-let-go type of story, then this is the one for you.

I loved it up until the very end. My issue with the ending was the fact Declan essentially apologized about having killed some of the tramps (the ones that almost killed him!) once he learned the truth about his girlfriend’s murder. I get that he was mad at Malachi for lying and deceiving him, but still! The tramps went around killing, hurting, destroying, manipulating…anyone they seemed to come into contact with. Wasn’t Malachi’s end goal to protect the city? I get that Declan didn’t want the job, but…

My only question relates to how Declan lived once he killed Malachi. I thought Malachi was the one keeping him alive. So how did he not die as well?

The narrator did an awesome job; I have no issues with his skills. He has a great accent that went well for the story, I think. I'd definitely listened to him again.

give it a shot

Declan is a great main character, you can really feel for him. The story has a real twilight zone feel. He knows the truth but no one else believes him