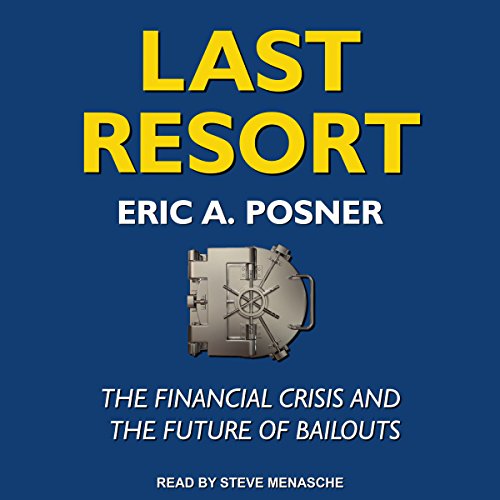 By: Eric A. Posner
Narrated by: Steve Menasche
Try for $0.00

The bailouts during the recent financial crisis enraged the public. They felt unfair - and counterproductive: people who take risks must be allowed to fail. If we reward firms that make irresponsible investments, costing taxpayers billions of dollars, aren't we encouraging them to continue to act irresponsibly, setting the stage for future crises? And beyond the ethics of it was the question of whether the government even had the authority to bail out failing firms like Bear Stearns and AIG.

The answer, according to Eric A. Posner, is no. The federal government freely and frequently violated the law with the bailouts - but it did so in the public interest. An understandable lack of sympathy toward Wall Street has obscured the fact that bailouts have happened throughout economic history and are unavoidable in any modern, market-based economy. And they're actually good. Contrary to popular belief, the financial system cannot operate properly unless the government stands ready to bail out banks and other firms.

Taking up the common objections raised by both right and left, Posner argues that future bailouts will occur. Acknowledging that inevitability, we can and must look ahead and carefully assess our policy options before we need them.

What listeners say about Last Resort

This well-composed book reviews the 2008 crisis and considers many facets, with an eye to the legalities. That is of great importance, though I am finding here, as with contracts (in both law and business usage), many events come in unforeseeable combinations. Creativity must be brought anew to the breaking contract or financial system. Fuzziness is faced on a few fronts at once: the rules suddenly are exposed as unclear ex ante, and the fit with new events was unforeseen. (For example, shadow banking became huge, outside the old rules.) In contracts theory this is referred to as an "incomplete contract:" players cannot perfectly (or as a practical matter) see all future events the contract might encounter. So, in a sudden fog ("emergency" is often the situation) decision makers must make their nimblest moves, both at fitting, and stretching, the rules to new situations. Institutions grew up in earlier times (such as the Fed's function as Lender of Last Resort (LLR) first expounded by Walter Bagehot in 1870s London and explained well here, as defined in the Federal Reserve Act as amended), only to careen into new situations. The old fix won't stem the new flood. Dilemmas are faced, not least when the rules and their regulator-decision-makers are also crashing into political pressures, emerging precipitously. A Congress with extreme constraints of unpreparedness, and its own fractious dynamics, is not well suited to emergency-quarterback, and must in the "fog of war" often defer to agency regulators, as happened here with the wholesale 2008 hand-overs of large sums to Treasury and the Fed and very broad discretion to apply them. All this is well laid out here. (Unlike the handover to George W. Bush of similar post 9-11 "emergency" military powers and mountains of our cash, IMO, this other Bush-era hand-over went pretty well, all things considered.)

My view (I think mostly in accord with this author's) is that many of these moves as done by Bernanke, Paulson, Geithner et al.), were virtuoso moves. I was more inclined than the author to see many of those moves as logical extensions of the agencies' existing legal powers, albeit requiring lots of creativity, one might say, a few logical acrobatics. The author here is not hard-selling a point of view but rather walking through these complexities as they happened. He does have a point of view, and calls a breach of law here and there as he sees it (which I do not intend to mean, was on small matters: we are talking about AIG, Fannie-Freddie and auto bailouts, after all). I found all of his arguments cogent and helpful, if I did not categorically agree. The telling here moves smoothly from history to law and back. The author is an outstanding law teacher, here. The latter part of the book has suggestions for the future, well worth listening to (hint: we do NOT have the system the author recommends; we are further from it, in some ways, under 2010 Dodd Frank legislation, than we were in 2008).

To hone in on one legal-financial point in particular: I find his view of government takeover scenarios as implicating Fifth Amendment "takings" law (hence bringing a government duty of just compensation, e.g. to shareholders left with losses in such firms as AIG) to be fascinating. Here is a framework we would benefit to develop further (before Congress gets even more tangled, and the Fog of meltdown again descends). I merely differ on some items in the author's position. I would not be so generous to shareholders in valuation of their due compensation. But in all, I join this author in the basic directions of what WILL, at least roughly, be needed to avoid catastrophe next time. I have a big worry that politically, Congress (and the public) after that trauma are so fractious and shrill (not to mention incompetent on this subject matter: Mnuchin is no Paulson, and the broad public is at loggerheads about the basic good and bad guys), and Dodd-Frank ties hands so much, we might have merely apoplexy in DC just as the system cascades out of control. That poses the risk of a 1930s type deep persistent slump, and we know that that played out -- a little thing called WW2. Now is the time to think things through and redesign. This book is a great step toward that.