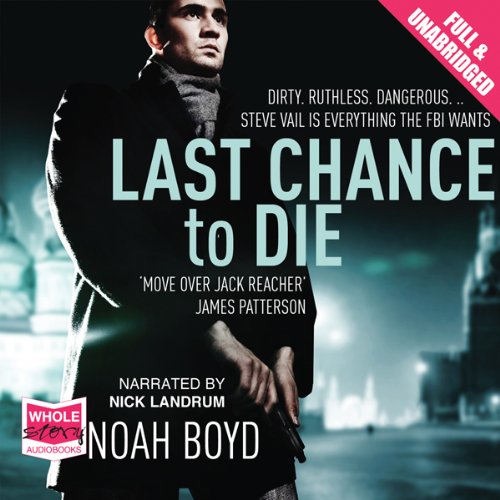 Calculus, a Russian intelligence officer, approaches the FBI claiming he knows of several Americans who are supplying information to Russia. But when Calculus is recalled to Moscow, the Bureau suspects the worst. The race is on to track down the informants, and Steve Vail is the ideal candidate for this kind of stealth mission. But it soon becomes clear that this mission won’t be easy. In fact, it could be downright deadly….

What listeners say about Last Chance to Die

I had high hopes for this, particularly after reading the glowing reviews of Noah Boyd's 'The Bricklayer'. Within the first few minutes of listening, my expectations went into free-fall and never recovered.

The plotting is completely unconvincing. It has the goofy implausibility that you would not even expect from teenage spy fiction.

The characters are dull and uninteresting. What is intended to be banter between the two lead characters is stilted, witless and incoherent.

The narration is dreary and monotonous, and it is sometimes difficult to work out which character is supposed to be speaking.

Save your money - try something else.

No, I don't think I would. It's not bad, really but I'd only really recommend it if you saw the paperback in the bargain bin or something. I did quite enjoy The Bricklayer, even with it's occasional sketchy "banter" between the characters and stretching my suspension of disbelief. I thought perhaps the author would hit his stride in the second book, tighten it up a bit but unfortunately that's just not the case.I came onto this book after a long stint of Lee Child and Michael Connelly books and just didn't get the same grip as with those. It's not as fun as Reacher, not as clever and suspenseful as Bosch.

What was most disappointing about Noah Boyd’s story?

The dialogue. The witty back and forth between the main characters doesn't feel natural and is often totally out of place in comparison to the events that are happening around them. It all feels like the same person talking to himself, knowing what each reply will be and their own response for it, not a real conversation between two people.

Wrong genre Nick. He's not terrible by any means, he can do noticeably different voices for different characters which always helps with an audio book. His voice doesn't really carry the drama or the threat though. He sounds very lighthearted, as if he is reading a slightly comedic book even when he is describing a man with his throat cut. It just doesn't fit. Really needed someone like Dick Hill or Scott Brick, that might have come close to saving the whole show for me.

Really enjoyed this story - very clever. The denigrating review on audible was inaccurate. Hope Audible publishes more of his books.

A story that you can be involved in!

You can follow along easily and are given enough clues to solve things before they are revealed. Great follow up story that will get you hooked to this series of books!