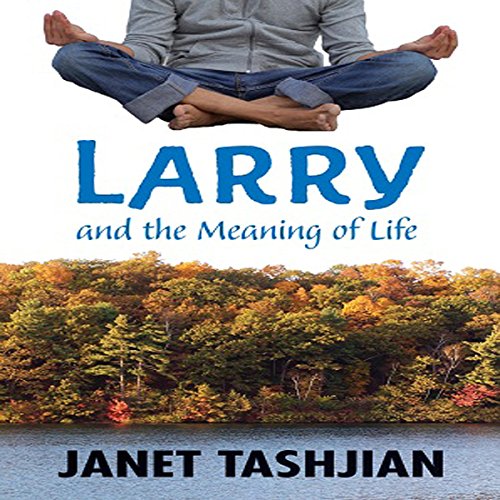 Larry and the Meaning of Life

By: Janet Tashjian
Narrated by: Matt Green
Try for $0.00

Josh Swensen (otherwise known as Larry) can't seem to get off the couch. His usual overactive imagination and save-the-world mindset have all but vanished, and his best friend Beth is seriously worried.

When Beth coaxes Josh into taking a walk at Walden Pond, Josh meets Gus Muldarian, a spiritual guru who convinces him to join his study group as a way to find deeper meaning in life. Josh thinks Gus is a joke. Still, feeling desperate and seeing no way out of his rut, he agrees to try it. What begins as a harmless Thoreau-esque search for meaning soon turns into Josh's most chaotic and profound adventure yet.

After the success of The Gospel According to Larry and Vote for Larry, Janet Tashjian returns with yet another tour de force - a book that explores important topics and will keep teens hooked right until the unexpected end.

What listeners say about Larry and the Meaning of Life

Apologies to the author and narrator, I'm sure you still worked hard and put in a lot effort. The narration sounded like a snotty teenaged girl who lived solely on Facebook and Twitter. Nothing like the character Josh of the previous two books (I am trying not to compare against Jesse Eisenberg, but the actual Josh Swenson character). The entire plot felt like a misguided attempt to put Josh in a wild scenario in order to make him grow and preach his usual moral standpoint. Except after realizing four chapters in, that the story was hot garbage, retcon it with *that* plot twist. I spent so much of the book wondering why it was so bad, that I finally just quit and read spoilers to finish it. It wasn't until after I read the spoilers that I decided to go back and finish it (didn't make any of the story any better, but at least there was a reason for why I was being put through such a contrived plot with unbearable characters). I loved book 1, was ok with book 2, and was glad that Audible has a good return policy with book 3.

glad this was just as great as the first two. glad i got it. thx