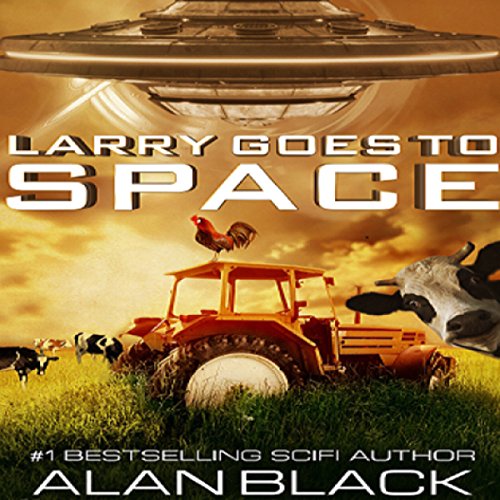 Larry enjoyed raising cattle on his Kansas farm, until the aliens arrived. He couldn't help himself; he was going for a ride with aliens from outer space! The aliens wouldn't tell him where he was going, how long he would be gone, or if he was ever coming back, but a space trip sounded like more fun than beer and burgers at Benny's Been There and Done That Bar and Grill. He had to go. Larry's ride into deep space wasn't just a Sunday jaunt. This space-faring species was in danger of being wiped off the galactic map. They offered Larry a ride because his assistance was vital to their survival, but they were xenophobic to the point of barely tolerating Larry in the same room. He was willing to help, but what could he do? Could he live long enough to save himself? What skills did Larry have to save an alien species threatened with annihilation? Every time he asked them for information, they stonewalled him.

What listeners say about Larry Goes to Space

A nice twist on Farmboy Abducted by Aliens. The farmboy is a grown man who has a sense of humor. He basically volunteers to be abducted; doesn't everyone want a chance to go into space? As a farmer he has the can-do attitude of people who have to problem solve everyday and take care of business.

There are plenty of twists to keep the plot from becoming trite. The aliens are vegetarians who are terrified of a species that eats meat. The threat they need help with stems from their inability to think like a predator.

The author has a nice sense of humor so it is an enjoyable read. Cows are telepaths that receive only, and then forget. Inanimate objects have opinions. So call it quirky and light. The aliens get their problem solved and he gets a spaceship. It won't win writing awards. Some plot points are strained. I didn't really buy the ending but it isn't a deal breaker.

Fun story... until the politics

What you have here is a ok 2.5-3 star book that plummets to 0 because in the last 1/4th the author forgets to tell a story and just gets up on his soap box and rants like a loon.

The book stars like a somewhat silly classic Star Trek episode. The Aliens are all one thing, on a single biosphere planet with a problem that is easily solved by the a common skill of the protagonist. (In this case, his proficiency at mine sweeper.) There's even a "show me about this earth thing you call kissing" subplot. But instead of kissing it's the earth thing known as the "power of friendship".

There are small critiques you can make about the first 3/4ths of the book. The asides go on a little to long and the jokes about the thought and feeling of inanimate objects get old when they are made over and over again. It's basically "dad jokes the book". Dumb but inoffensive.

Then it gets offensive.

There're warnings about where things are going. Little comments that come off as weirdly unnecessary and very conservative. And even if it was just a few ultra-conservative comments it wouldn't be a bad book. But the "governments are bad" narrative completely takes over the end of the book. The author will not shut up about it. Government are bad, private business is just the bestest thing ever, unions are robbery, Jonas Salk was a chump for giving away the polio vaccine and no government helped cure polio and on and on...

They're not even good arguments, back up by facts or philosophies. We are not talking about Ayn Rand where there's substance to back up the argument even if you disagree with them. It's just random, shockingly uniformed, conservative talking points from a bad political rally repeated over and over again. The last fourth of the book is like and unending thanksgiving dinner with you crazy uncle.

what's up with the anti government thing at the end? the story was okay but the story got a little fox news-ie at the end which soured my view.

Alan Black in a different light.

Well this is definitely a tongue in cheek sarcastic romp in the flavor of hitch hikers guide to the the Galaxy. Yeah I enjoyed it.

probably one extreme of Allen black Style. silly in the extreme but explores some interesting Concepts in EXO biology sociology