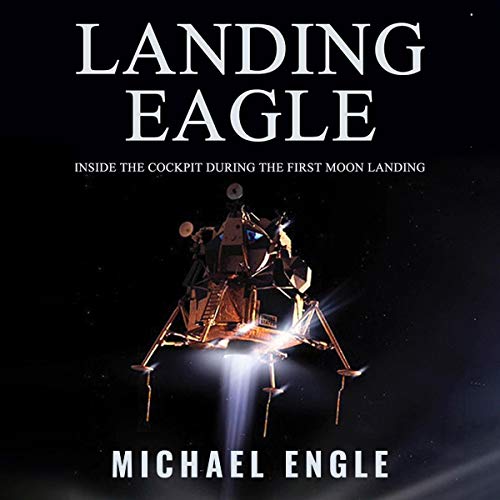 Landing Eagle: Inside the Cockpit During the First Moon Landing

By: Michael Engle
Narrated by: Sean Tivenan
Try for $0.00

Fifty years ago, in a small, fragile spacecraft designed for only one purpose - landing on the Moon - two American astronauts prepared to fly that spacecraft from its 10 mile high orbit above the Moon down to a landing on the Sea of Tranquility. It was a sea in name only. It was actually a bone dry, ancient dusty basin pockmarked with craters and littered with rocks and boulders. Somewhere in that 500 mile diameter basin, the astronauts would attempt to make Mankind’s first landing on the Moon.

Neil Armstrong would pilot the Lunar Module Eagle during its 12 minute descent from orbit down to a landing. Col. Edwin “Buzz” Aldrin would assist him. On the way down they would encounter a host of problems, any one of which could have potentially caused them to have to call off the landing, or, even worse, die making the attempt. The problems were all technical - communications problems, computer problems, guidance problems, sensor problems. Armstrong and Aldrin faced the very real risk of dying by the very same technical sword that they had to live by in order to accomplish the enormous task of landing on the Moon for the first time.

Yet the human skills Armstrong and Aldrin employed would be more than equal to the task. Armstrong’s formidable skills as an aviator, honed from the time he was a young boy, would serve him well as he piloted Eagle down amidst a continuing series of systems problems that might have fatally distracted a lesser aviator. Armstrong’s brilliant piloting was complemented by Aldrin’s equally remarkable discipline and calmness as he stoically provided a running commentary on altitude and descent rate while handling systems problems that threatened the landing. Finally, after a harrowing 12 and a half minutes, Armstrong gently landed Eagle at Tranquility Base, a name he had personally chosen to denote the location of the first Moon landing.

In Landing Eagle: Inside the Cockpit During the First Moon Landing, author Mike Engle gives a minute by minute account of the events that occurred throughout Eagle’s descent and landing on the Moon. Engle, a retired NASA engineer and Mission Control flight controller, uses NASA audio files of actual voice recordings made inside Eagle’s cockpit during landing to give the listener an inside-the-cockpit perspective on the first Moon landing. Engle’s transcripts of these recordings, along with background material on the history and technical details behind the enormous effort to accomplish the first Moon landing, give a new and fascinating insight into the events that occurred on that remarkable day 50 years ago.

What listeners say about Landing Eagle: Inside the Cockpit During the First Moon Landing

Having grown up through the whole Apollo program, I thoroughly enjoyed reading this book. I learned a great deal about what it was like inside the lunar module. I also learned so much about Neil Armstrong. His skills as a pilot and his knowledge as an engineer, certainly helped bring the Moon-landing to fruition. I’ve always admired those who have flown in space and this book just deepened that admiration.

I’m sorry but this is just the same NASA talking down to children cookie cutter boilerplate “story” of Armstrong vs the Moon
(Don’t get me wrong - Armstrong is fantastic but there is already 50 years of his story out there)
Read the Apollo flight and Surface Journals for free (and they are much, much better)

Save your money. Nothing here you have not akeeady heard in other accounts of the Apillo 11 landing story.

This is a fun story to listen too. The last 12 seconds before landing on the moon brings back real memories for me as I was 16 at the time. I remember staying up all through the landing to watch history unfold. What I did not know then but now do, was how incredibly challenging the last few seconds were to this mission. This story is well written, and as mentioned before enjoyable for me to relive. If you were not born during this time or have not experienced it, then I highly recommend this audio book. I have always followed NASA and continue to do so today. Remember each night when you look up at the Moon, that just over 50 years ago Landing Eagle made history. Congratulations to all three of the brave astronauts and the hundreds of thousands of dedicated workers that made this happen. Great job by author Michael Engle.

This book focuses entirely on the 12 minute descent of the Eagle LM from Lunar orbit to landing. The story is well told, and gives the reader a glimpse of what it was like for Armstrong and Aldrin without the usual media hype. As a certified space junkie, I enjoyed this book despite all of the previous reading that I have done on the Lunar space program.