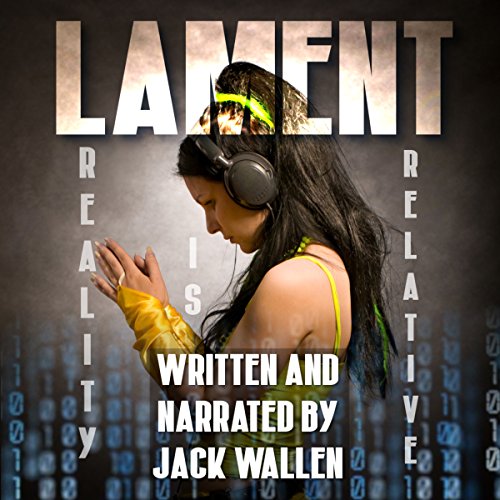 Garbage in. Garbage out.

In a world ruled by Big Data and BigPharma, society's only hope falls into the hands of neophyte data jockeys known as Somnambulous. While the human race was jacking in and sucking down a few ones and zeros to ride the Lament, Somnambulous discovered something big and dark on the horizon. Big Data had Big Pharma. Big Pharma had Lament. Lament had everyone.

On the heels of their discovery, Somnambulous sends their strongest coder into Ocular Reality to recruit the one construct that could put an end to both Big Data and Big Pharma.

What listeners say about Lament

A great read. Wallen is both a talented author and writer. I thoroughly enjoyed this book.

The code holds the secrets

Would you listen to Lament again? Why?

Yes it was well written and the narration was excellent

What other book might you compare Lament to and why?

I don't compare books , I think it is rude and not helpful.

Have you listened to any of Jack Wallen’s other performances before? How does this one compare?

Yes , many of the books he has narrated. I like his style. He uses his voice instead of sound effects that drown out the narrator's voice to get the utmost reaction from his audience.

It was unlike anything I had read before. Fast, Complex and well written.I am not Tech savvy or a Cyber Geek and yet this book was enjoyable and not over my head.
Cyber punk
Jet is the one who discovered Lament and named it and is the creator of Somnambulous and it employs some of the top hackers a team that’s main purpose is to look after Human population and protect them by taking down Big Data &Big Pharma .The team consist of the best of the best Jet ,Sidy Sin for short, Anvil,Rez is second in charge, and the newest member Lurch.
Jinnai(Jin),has always been on Jet’s side and will help him in any way she can.Plus Jet is one of the few people that can understand Jin speak.She may have a future at Somamabulous as a team member(She is a delightful character.)She is the Princess of OR. A cute smart and inventive cherub of a girl.
Their Arch nemesis is at Pharm Con is Dorian Drake a construct that may not be as bad as he seems. Eccentric yes,but perhaps not altogether bad.His boss or the Boss over the whole of Pharm Con and DataThe CHER a much more sinister Construct that has evolved and holds human life in such low regard.
A few other players is the World Security Agency (WSA)
Lament the overwhelming craving for Data.It does bad things to the human body and mind if they can’t get their fix of data.
This story takes place in two worlds, Real Time (RT) and Ocular Reality (OR).A few of the key players in OR is Kagami The leader of Yakuza in the Shinjuku area a dark and seedy place.And she can call the Reavers if you are a troublemaker to whipe you out.
AK is the main Club in OR Built for the Cosplaying folks seeking petabyte data downloads. Ravenouse can get you whatever you desire in clubAK.Be careful in Club AK or you could find yourself a willing prisoner .
There are many dangerous forgotten fragments of old code that have evolved into things that can easily take your life in Plague town in OR
This was a delightful hacker’s dream of a story in a future world. Well written with knowledge of the cyber world.Jack Wallen has brought us yet another book that was conceived outside of the box.

An exciting and digital ride into the world of Lament. The world has changed and now it is ruled by big pharma and big data we follow our only hope Somnambulous and their leader Jet.

A wonderful sci-fi piece reminiscent of the film Johnny Mnemonic. Fast pace and complex but author Jack Wallen makes it easy to understand.

This tale was exciting and fantastic.