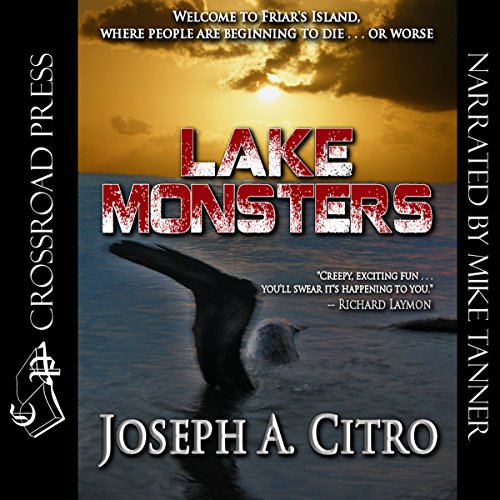 Downsized from his job and dumped by his girlfriend, Harrison Allen longs for a fresh start. Alone, with no prospects or plans, he relocates to a borrowed house on Friars Island in Lake Champlain to relax, contemplate, and begin redefining his life. Then he hears about the monsters....

Creatures - perhaps similar to those of Loch Ness - are said to inhabit the murky waters and fogbound marshes of his new island home. His interest piqued, Harrison becomes preoccupied with finding them. But his innocent questions provoke a surprising response: the islanders won't discuss monsters. After Harrison meets the lovely local schoolteacher, Nancy Wells, events inexplicably turn menacing. He suspects he is being watched; he is warned away from an abandoned monastery; and somehow he wins the wrath of a murderous local bully. Then people begin to disappear... and die.

Harrison's harmless monster hunt discloses something dark and disturbing beating in the heart of this tiny Vermont town. Malevolent forces, powerful and primitive, propel the unwary couple into a maelstrom of escalating terror. Suddenly they find themselves targeted by an unstoppable evil never before contemplated and impossible to comprehend.

Harrison's "new beginning" is like nothing he'd ever planned. And Lake Monsters ends with a surprise that's shocking, unexpected, and unforgettable.

What listeners say about Lake Monsters

Still Waiting to Be Frightened

Are you kidding me? This might have been a passable short story, but not a long drawn out novel. To make it even more tedious, there were chapters within the chapters. The narrator’s voice wasn’t bad, but it was the same for many of the local folks.