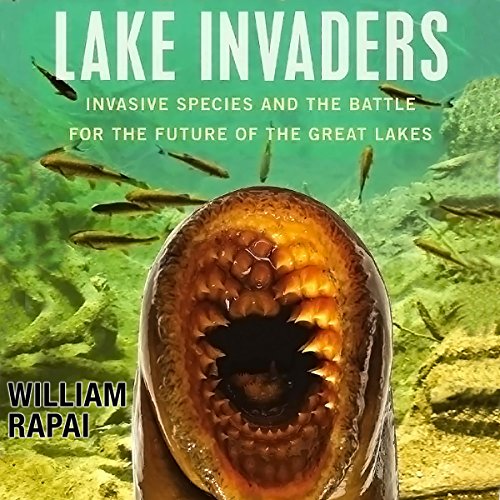 By: William Rapai
Narrated by: David Gilmore
Try for $0.00

There are more than 180 exotic species in the Great Lakes. Some, such as green algae, the Asian tapeworm, and the suckermouth minnow, have had little or no impact so far. But a handful of others - sea lamprey, alewife, round goby, quagga mussel, zebra mussel, Eurasian watermilfoil, spiny water flea, and rusty crayfish - have conducted an all-out assault on the Great Lakes and are winning the battle. In Lake Invaders: Invasive Species and the Battle for the Future of the Great Lakes, William Rapai focuses on the impact of these invasives.

Rapai begins with a brief biological and geological history of the Great Lakes. He then examines the history of the Great Lakes from a human dimension, with the construction of the Erie Canal and Welland Canal, opening the doors to an ecosystem that had previously been isolated. The seven chapters that follow each feature a different invasive species, with information about its arrival and impact, including a larger story of ballast water, control efforts, and a forward-thinking shift to prevention.

Rapai makes a strong case for what is at stake with the growing number of invasive species in the lakes. He examines new policies and the tradeoffs that must be weighed, and ends with an inspired call for action.

"An exceptionally well written, organized and presented study that is very strongly recommended..." ( Midwest Book Review)
"William Rapai has written an important book that I hope everyone who cares about the Great Lakes will read...I give it my highest recommendation." (Jerry Dennis, author of The Living Great Lakes: Searching for the Heart of the Inland Seas)

What listeners say about Lake Invaders

Satisfied my Urge for an In-depth Specific Topic

It helped that I grew up in the Great Lakes Region... as for a critique, I was bemused that the book heavily focused on 'stopping' the spread of invasive species, and it covered several successful approaches; and it noted how victim species sometimes turn the tables when they discover that the young of the invasive species are tasty treats... So the book is thinking 'stopping them' and I'm thinking, 'all that food' for a growing human civilization... the book does touch on that 'gastro' solution, but far too lightly. One noteworthy quip: "Let's just fish them into extinction - we are very good at that..."

So contrary to the books premise that invasive species are a plague (to bio-diversity, granted), I noted that they may also be 'man's best friend' - as a swiftly self-producing source of food... so the ideal solution would be to take advantage of that AND maintain bio-diverslty... the field isn't new, but there is still a lot of research and solution experimentation and implementation to be done...