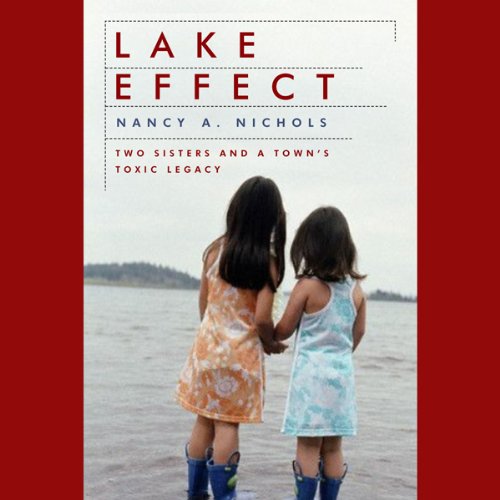 By: Nancy A. Nichols
Narrated by: Tracy Pfau

On her deathbed, Sue asked her sister for one thing: to write about the connection between the industrial pollution in their hometown and the rare cancer that was killing her. Fulfilling that promise has been Nancy Nichols mission for more than a decade.

Lake Effect is the story of her investigation. It reaches back to their childhood in Waukegan, Illinois, an industrial town on Lake Michigan once known for good factory jobs and great fishing. Now Waukegan is famous for its Superfund sites: as one resident put it, asbestos to the north, PCBs to the south. Drawing on her experience as a journalist, Nichols interviewed dozens of scientists, doctors, and environmentalists to determine if these pollutants could have played a role in her sister's death.

While researching Sue's cancer, she discovered her own: a vicious though treatable form of pancreatic cancer. Doctors and even family urged her to forget causes and concentrate on cures, but Nichols knew that it was relentless questioning that had led to her diagnosis - and that it is questioning by government as well as individuals that could save other lives. Lake Effect challenges us to ask why. It is the fulfillment of a sister's promise. And it is a call to stop the pollution that is endangering the health of all our families.

Kudos to Nancy Nichols for the amazing research and putting the pieces of this horrific tragedy together and documenting it.

My mother, a third generation born and raised Waukeganite mourned the destruction of her beloved town until her death from lung cancer. Waukegan, as she always said was used up by the big companies and then thrown away. They all disappeared, leaving behind economic devastation for thousands of displaced workers and countless people poisoned into illness and finally death. My grandfather, a long time employee of Johns Manville died a painful death from Mesothelioma, while my mother held his hand. Three generations later, we know the poison still exists and Waukegan is about as poor of a community as there is.

Growing up myself in the community just north of Waukegan in the 70’s and 80’s, I’ve seen the final, steady decline of Waukegan. It’s obvious it was once a beautiful and bountiful community. As Ms Nichols bravely pointed out, has become a haven for impoverished families and undocumented minorities. Housing is extremely cheap, crime is out of control and the school system overburdened and broke. These are all the result of the poisoning of the once beautiful county seat.

Growing up in this area, it was impossible not to know lots of people displaced by the closing of these plants. Often whole families were employed by OMC or Johns Manville and once their doors closed, these families were wrecked. No insurance to manage their wide array of illnesses. No pension. No skills to work anywhere else - Some too old or sick to work. No money left to live the life of financial security some had planned for their entire lives to only grow old in poverty and often illness.

Thank you Ms Nichols for revealing the truth. I’d heard it’s and pieces my whole life, but never had the big picture. I mourn the loss of your sister. I will hold my sister closer when I hug her because she was able to win her battle with cancer at the young age of 19. Though she still has a wide array of “mysterious” illnesses, she’s thankfully still in remission 30+ years later.