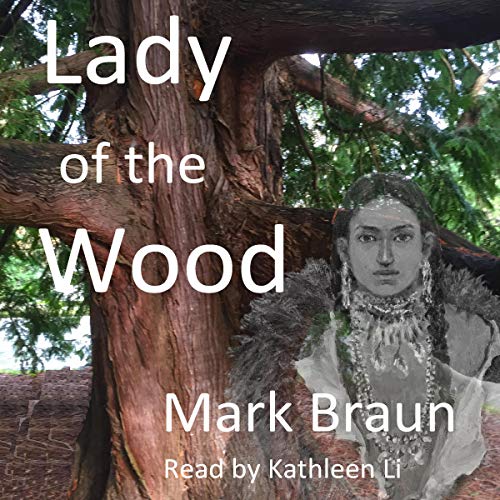 Lady of the Wood

Native American legends of Puget Sound tell of fierce battles between an enormous snake and a mountain eagle. Being supernatural entities, neither could destroy the other. Yet their battles were so fierce that the very Earth would tremble and shake, mountains and forests would collapse.

In the year 900, the worst of all clashes occurred. As the Earth shook violently, the waters of Puget Sound rose and surged in the form of a tsunami, wiping away the coastal villages and all the people who lived by the water’s edge. As the souls of the dead streamed into the Spirit World, they told of their terrible and frightening deaths, and the spirits of the children lamented their lives cut short.

Moved by the sad stories, the spirit of an Indian woman, Owiyahl, shaman and midwife in her former life, decides to try and prevent the loss of life. Through her bones, preserved for over a thousand years within the wood of a massive cedar tree, she is drawn to the present day, where she convinces a time walker to go back in history to warn the people. But not all goes as planned.

What listeners say about Lady of the Wood

A Unique and Imaginative Story

I enjoyed listeneing to this unique and imaginitive story about our connection with those who lived here long before us. Kathleen Li provided an excellent narration that helped the characters come to life.

I really loved this story and it’s narration. I love this is the perfect book if you love native American folklore mixed with mysticism in a modern day twist. I wasn’t sure where the book was heading to at the very beginning but it took a few amazing and interesting turns. I love love love the story. Great job writing it and I look forward to the next book. If there is one

I love history! Give me a book with some history and folklore and you have me hooked, and this book did not disappoint. A mixture of First Nation folklore, history and time travel make for a captivating story. Narration added to the mystique of this story; Ms. Li's portrayal of each character was fantastic. I am looking forward to a follow up book.
I accepted a complimentary copy of this book in exchange for an honest review.

I loved this story it was heartbreaking, genuine, and heartwarming. I will not give spoilers and this book is long but the details are very important. The story is well developed and reads like a diary that is feasible in this day and age. This book may be a work of fiction but as a person of Indigenous heritage is rings true to some of our teachings. Kathleen Li did a fantastic job as narrator her voice is smooth but yet full of emotion. I highly recommend this book it is amazing.

A wonderful story about the power of storytelling, and the importance of lives well lived. Highly recommend!

*Spoilers possible in the discussion.

A dying man passes on some haunted/possessed?? wood pieces to a friend (there's a Native American lady's spirit associated with them).

- The story wasn’t quite sure what it wanted to be. It started out as normal contemporary with a little bit of paranormal, then flipped straight to time travel. I guess it could be seen as fantasy, but it’d be better off in a subgenre of scifi like time travel.

- It’s a highly repetitive story that’s about 5 hours too long. I get why the multiple versions of the little side story are told (Snake vs Eagle, Whale vs. Eagle), but it’s still annoying to hear almost the same story with slight variations about 6 times.

- Acknowledging a problem 7 times (you could change the past for the worse or for the better) is not really addressing it.

- There are some continuity mistakes that may have been done purposefully? One character is supposed to join the confederate army then later he’s sneaking behind confederate lines.

- The story is definitely unique, but skips around and lacks focus. It starts off with a sentient tree. Then a Native American woman. Then, it’s about John and his connection to the guy who dies. BTW, love that guy. He has the most personality of all of the characters. Then it becomes about Maggie for a hot second before flipping to be about Emily (John’s wife) and Owiyahl. About mid-way through the book, it concentrates heavily on Emily and sticks with her for most of the book, besides a rather longwinded tangent to follow her mother.

- Narration’s nicely handled. Hat’s off to the narrator for pronouncing Owiyahl (sounded like Oleeo in the audiobook). Never would have pronounced it that way, but much easier to listen to than read something like that. It was pretty easy to keep track of who’s who.

- Emily’s father (Bill) and her mother (Lucille) don’t feel very realistic. I guess some marriages end up like theirs, but it just seems like people at the end of this story have 0 emotions left. They’re just like “yeah, that’s life. Shucks. Let’s move on and be happy.”

- Relatively clean despite about 3 almost rapes.

If you like time travel stories and tales that weave in Native American lore, this is probably gonna be something you want to try.
*I received a free copy. I have chosen to review.

I was not sure I would enjoy this audio book, wrong, loved it. The fact that research had been done to ensure the characters would not be "flakey" added greatly to the overall story. I liked the fact that those from the past Cared for those in the future and vice versa.The secondary story of Emily's mother was a nice addition. Would I read another Novel by Mark Braun, certainly would.