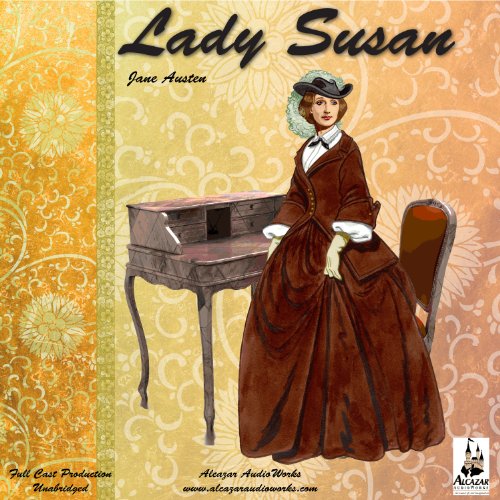 Written in the then fashionable style form of letters between the characters in the book, Jane Austen tells the story of the beautiful widow Lady Susan. Lady Susan has an eye toward re-marrying well, and marrying off her teenage daughter. To achieve her objectives, she spins a tale of Victorian humor and manipulation. In the end, she outsmarts even herself.

Jane Austen's earliest known serious work, Lady Susan is a short, epistolary novel that portrays a woman bent on the exercise of her own powerful mind and personality to the point of social self-destruction. Lady Susan, a clever and ruthless widow, determines that her daughter is going to marry a man whom both detest. She sets her own sights on her sister-in-law's brother, all the while keeping an old affair simmering on the back burner. But people refuse to play the roles assigned them. In the end, her daughter gets the sister-in-law's brother, the old affair runs out of steam, and all that is left for Lady Susan is the man intended for her daughter, whom neither can abide. Told through a series of letters between the characters, the work concludes abruptly with the comment: "this correspondence…could not, to the great detriment of the Post Office revenue, be continued any longer."

Jane Austen (1775–1817) was born in Steventon, England, and later moved to Bath. She began to write early for her own and her family's amusement. Her novels, set in her own English countryside, depict the daily lives of provincial middle-class families with wry observation, a delicate irony, and a good-humored wit. She is now considered by many scholars to be the first great woman novelist.

What listeners say about Lady Susan

Beware of the Introduction

This early work by Jane Austen is not to be missed by her fans though it might be overlooked since it typically is not found on lists of her novels.The plot being unfolded in correspondence between the main characters, though a technique common at the time the novel was written, is an interesting literary device for the modern reader.This audio version is notable because it employs a cast of narrators that provide distinctive voices for the authors of each letter.

Unfortunately, the introduction is a spoiler since it reveals aspects of the character of the protagonist and plot elements that would be better left to the reader to discover. I suggest listeners fast forward 1 minute and 25 seconds into the audio book to pick up the narrative with the first letter.

I think it would have been better if the characters had British accents. They still did a good job. The first have was boring. I had to force myself through it. It got better through the second half. Had Jane Austen finished this story I'm sure it would be very interesting and entertaining. Imagining Lady Susan's character in a movie I'm sure would be fun to see.

Saw "Love and Friendship" as a movie and remembered that I'd never read Lady Susan, so I decided to listen to it while doing some sewing. Chose this edition as it had varied voices. Much of the production was high quality: harpsichord interludes and a great voice for the chapter titles, but who the heck chose the readers? All were Americans, and their delivery sounded like seventh graders doing a readers' theater--Lady Susan was especially overdone and gushing. Even an early Austen is subtle and restrained--that's what makes her so wonderful--but the readers missed that nuance completely. The story is entertaining, though pretty skimpy, especially towards the end, but the performance was terrible. Glad I only paid $1.95 for it, or I'd probably return it for a refund.

Would you try another book from Jane Austen and/or the narrators?

The story was great. Jane Austen, is amazing. I feel like I would have enjoyed it more if I read it myself or had better narrators.

When I am going to listen to Jane Austen, I want to feel like I'm in Regency ENGLAND. I don't want American accents. Also, the actors WAY over-acted. It felt silly and inappropriate.

Love this early Austen work. I also liked having different actors for the characters. But the performances weren't up to par.

I couldn't finish it. While the narration was fine in the beginning, about halfway through it falls apart. As the character of Lady Vernon begins quoting other characters in her letters to her mother, the chapters become more and more irritating. The narrator who does Lady Vernon's voice is usually pleasant enough to listen to, but as she begins speaking as Lady Vernon imitating Lady Susan, it's completely aggravating. She adopts a drawling, affected tone of voice that Lady Susan does not (thankfully) have in her own chapters and that is so unpleasant to listen to that I can't wait for her to shut up. This is a problem as these recitations get longer as the book goes on. While I can understand this may be a directorial decision to help listeners understand that Lady Vernon sees Susan in a negative light, it is completely unnecessary since she plainly tells us as much *in every chapter she has*, and it doesn't help that her affectations extend to Lady Vernon when quoting her own brother, Reginald, whom she claims to love and respect.
Likewise, the male narrator seems to have forgotten what voice he used for Reginald between Reginald's first chapter and the second time we hear from him. The same narrator voices Reginald's father, and while this is a minor quibble since it's only one chapter out of 24 so far, it is totally distracting that he uses a voice that sounds more like a farmer than a rich, titled gentleman of an "ancient and noble family name".
For that matter, the fact that the male author at least has a discernible English accent while the female narrator/narrators are clearly American doesn't help put the listener in the setting. Again, that is a minor quibble, but if you are going to listen to an Austen book, it is sort of expected.
IF I could get past the Lady Vernon narrator's representations of Lady Susan's dialog, this would probably be a book I would keep, but I can't stand to listen to it anymore and therefore can't finish it.

The narration of this story is dreadful. The mix of english accents, or lack of them is astounding for a book by J Austen. The narrators for the women are insipid. Why do you have narrators with N American accents? It was very disappointing.

Not my first engagement with Jane Austen's Lady Susan, but it was my first time experiencing it in audio format. And what a delightful surprise to discover that this audio was a cast of narrators to take the major voices of the story.

I found the humor stood out even more and enjoyed encountering those witty lines that draw my appreciation the most. Of particular worthiness are Lady Susan to her friend agasp when anyone catches her out in her machinations and her determination to make them pay because the individual put her out by forcing her to be more energetic in her selfish interests.

The performance sparkled in some ways, but in others I was distracted by the narrators acting the parts in voices that jangled against what I was hearing in my mind for the characters.

All in all, I was well-pleased with this edition and experience and would recommend the new found joy of experiencing Austen's fantastic works in audio.

Decent comedy and story by Austen and great characters. Some of the narrators were okay but there were two that were old sounding and just awful. They sounded like 1000 years old and not British. And a bit over acted too.