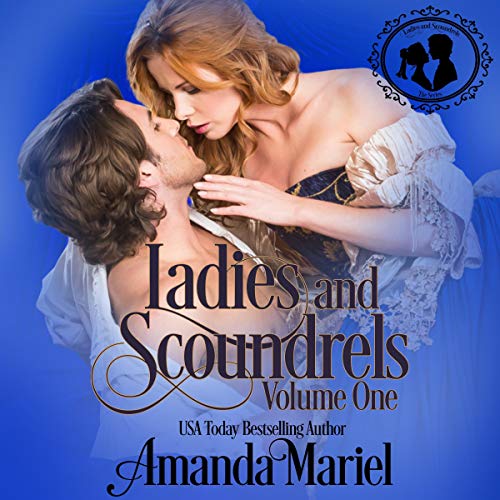 Ladies and Scoundrels, Volume One

By: Amanda Mariel
Narrated by: Anne Damman
Try for $0.00

Get swept away in the first three novels of the Ladies and Scoundrels series! These previous released, best-selling romances of love, loss, and redemption will keep you enthralled and leave you satisfied.

Lady Amelia has only known the comfort of life in mid-18th century English aristocracy. But when her father dies, she finds herself alone, grief stricken and not of age. Adding to her mounting problems, her appointed guardian, ordered her to relocate to America where she must remain until she comes of age.

With the help of Grace and Sarah, Amelia gets her uncle to agree to give her four weeks to settle her affairs and unbeknownst to him...find an English lord to marry. Despite her mourning period she endeavors to trap one of London’s eligible bachelors in matrimony so she can remain in her beloved England.

The Duke of Goldstone is devilishly handsome, but a Scottish Duke is entirely unacceptable as a possible husband. After all Scotland is not her beloved England. Goldstone has a nasty habit of showing up at all the wrong moments and thwarting her carefully laid plans to ensnare a suitable husband. Sparks fly as the pair find themselves at odds with each other and drawn to each other at the same time. Can they find a way to stop arguing long enough to explore their growing passion?

When faced with losing his father’s support, notorious rake Lord Julian Luvington sets his sights on Lady Sarah. She is as respectable as they come, just what his father ordered. But the lady shall not be easily won.

Lady Sarah Roseington is determined to marry for love or not at all, and she will do anything to obtain the freedom granted to men. A blackguard like Lord Luvington could destroy her hard-won reputation, but marriage to him also offers her the opportunities she cannot achieve on her own,

When Lord Luvington refuses to abandon his pursuit, Lady Sarah proposes an arrangement. Only the price may be more than either bargained for. Lady Sarah could lose more than her social standing and Julian could lose his heart.

Ruined by scandal, Claudia Akford survived years of marriage to a cruel brute. Widowed, she is determined to regain her standing in society, but Lord Shillington personifies temptation. Kind and gentle, yet masculine and sinfully handsome, he would make the perfect lover, but he wants more than she is willing to give.

While Henry Shillington knows a little of the beautiful but notorious Lady Claudia Akford, he is struck by her kindhearted, accomplished, and witty demeanor. The more time he spends in her company, the more he dreams of a future with her. But the lady resists his honorable overtures, and a mistress will never do for him.

What listeners say about Ladies and Scoundrels, Volume One

if you want a carefree, no worry, fake, story these 3 short stories are it. waste of a credit!

Would I listen to it again: yes
Did the stories keep me engaged: yes
Was I invested in the characters: yes
What did I like? Each story has a good pace, characters are engaging and is well written. There is an intertwining story tying them all together, but each story can be listened to on its own.
○ Scandalous Endeavours: Ameila is strong, witty and smart and her banter with Richard is delightful.
○ Scandalous Intentions: Julian sets his sights on Sara and isn't giving up until he gets what he wants.
○ Scandalous Redemption: widowed Claudia is finally free of an abusive husband - can stuffed shirt Henry convince her he is what she needs?

Narrator comment: I enjoyed Anne Damman's narration, she's done a great job bringing these three stories to life, each character is clear and I enjoyed the audio experience.

This was a surprisingly good story, I really enjoyed it. The storyline is well-developed, and characters are engaging. It's well-plotted, well- written, and well-paced.

The Narration by Anne Damman is excellent. She does a great job with the different character's voices. I was given a free copy of this audiobook at my request and have voluntarily left this unbiased review.

Who is the scoundrel?

This is 3 books in one and well worth the credit. Historical romance at it's best. Woman had it bad in those days and must have a man. The women in these stories knew they must have a man all but one. Sarah said she would only marry for love. Amelia must find a husband or her uncle is going to send her to America. Claudia never wants a man to own her again. The Narrator Ann Damman did a great job.


This book
was given to me for free at my request and I provided this voluntary review.