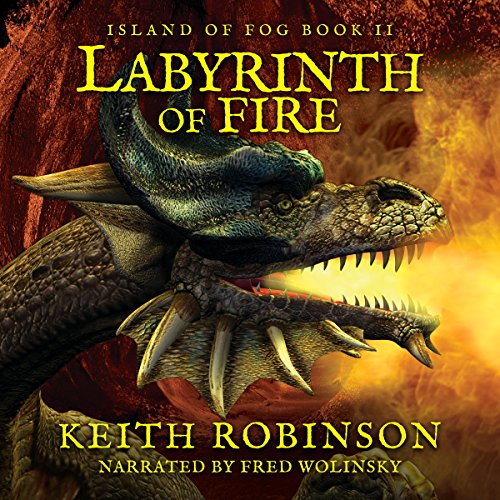 By: Keith Robinson
Narrated by: Fred Wolinsky
Try for $0.00

Hal Franklin and his friends have made it safely into Miss Simone's world. As shapeshifters, some of them are looking forward to meeting their alternate kind. But others dread the prospect.

Dewey, for instance, quickly feels the pressure of being a centaur. Meanwhile Lauren and Hal are quaking in their shoes. The village in the north is under constant attack from harpies and dragons, and these vicious creatures must somehow be reasoned with and persuaded not to plunder and steal and, most importantly, not to eat humans! The trouble is neither harpies nor dragons are interested in negotiating.

Hal and his friends join forces to deal with these serious issues. They end up in the heart of dragon country, down in the Labyrinth of Fire, beneath an oozing volcano. Somehow they must make the dragons see the error of their ways. Their quest forces them to question the extent of their shapeshifting abilities, and this leads to a shocking discovery that is likely to start a war.

What listeners say about Labyrinth of Fire

This is an excellent second book in the series. I know this series is slated for kids 9 and up and I do agree that young adults will love these books, but I also love them and I'm an adult. This story picks up where book 1 ends and the kids are going on their first mission and learning their new skills. I really enjoyed following along as the kids developed a little more and learned a few new lessons along the way. I'm looking forward to their next adventure!

Fred, the narrator, does another amazing job with this story. He has a very unique voice and this type of book is perfect for his voice. He does an excellent job with all of the different voices in this story. It is very easy to know who is talking at all times. Great job!!

Thrilling sequel to Island of Fog

What did you love best about Labyrinth of Fire?

I really like this sequel to Island of Fog. It has the same feeling of the first book, with a realistic fantasy. Mr. Robinson has written a good story that brings the characters that we met in book one more into our thoughts – we learn more about their past, and meet new characters as well. There are good tense moments that keep you on the edge of your seat. The book is a fun story with a good plot. At first, Mr. Wolinsky’s voice sounds a little funny when doing female voices, but as the story goes on, it blends seamlessly into the story. The range of characters Wolinsky can pull off is pretty amazing. I do prefer reading the written word but am finding that with good narration, the audiobooks seem to add a dimension to the characters. I really liked this book, and can’t wait to hear book 3!

Mr. Wolinsky has a pleasant narrating voice that makes the story come to life. You could actually imagine yourself there with all of the characters.

I would have liked to but didn't have the time.

A quest where you have to rely on wits & trickery

Note: I highly recommend reading Book 1 (Island of Fog) before reading this book.

Our hero kids (Hal, Robbie, Abigail, Darcy, Dewey, Emily, Fenton, and Lauren) from Book 1 continue on with new adventures in this tale. As they settle into their new homes and town in Miss Simone’s world, they also learn more about their abilities. Each will face challenges. There’s child-stealing harpies and dragons with a taste for human flesh. These shape-shifting kids will rise to the occasion!

Not all of the villagers are happy to have yet more shape shifters in their mist. The kids have to deal with some bullying and town politics. The centaurs want the humans to stop mining all together, but the mined ore provides energy for the human homes, making their lives easier. Miss Simone talks all the parties into allowing Dewey (who can shift into Centaur form) to be the one to decide after he has investigated the matter. This is the start of the missions the kids will be sent on to negotiate with the magical creatures and humans alike.

Our heroes are all around 12 going on 13 and love’s first blush is in the air. It was rather cute to see that in the midst of all the deadly serious events of the book. In Book 1, they really were just kids with school, play time, a few chores, etc. But in this book they are coming of age and adults are looking to them to make major decisions or take on actions that will affect many. The kids didn’t always do the exact right thing, but they all rose to the challenge. I was especially proud of how the harpies were handled. Totally did not see that coming! And it was harsh! That made the whole scene so much more powerful.

The whole book had a faster pace and more adventures than Book 1. I definitely enjoyed it more. We get to meet some of the first generation of shape shifters and through Dewey, we learn more about how the shape shifters were made. The dragons and their society were interesting to learn about. Plus there are these holes between the destroyed, polluted Earth and Miss Simone’s magical world that we learn more about. Fairies, wood nymphs, ogres, lizards of various types, and of course, a manticore! There was never a dull moment in this tale.

I received this book free of charge from the narrator in exchange for an honest review.

The Narration: Fred Wolinsky did a great job with the narration, keeping all the kid’s voices and the beasty voices distinct. When one of the kids shifts, Wolinsky somehow manages to make the shifter version sound very similar to their human voice, which was great. He even did a few little touches like making certain conversations sound a bit different to indicate it was mindspeak and such.

Awesome Audio for all ages

Where does Labyrinth of Fire rank among all the audiobooks you’ve listened to so far?

High is was awesome and one for the whole family

What was one of the most memorable moments of Labyrinth of Fire?

All of it, he puts his all into the performance and make it so wonderful for everyone to listen to

Great for Kids and Adults!

What was one of the most memorable moments of Labyrinth of Fire?

Most memorable to me is the way the kids use their brains as well as their shapeshifting abilities to solve problems.

What does Fred Wolinsky bring to the story that you wouldn’t experience if you just read the book?

Fred once again brings emotion to each character. He makes you realize that even though these kids have special powers, they are still just young adolescents with all the typical insecurities of youth.

Can't wait to continue this series with Hal and his friends!

~ I received a free copy of this audiobook in exchange for an honest review.

This is the second audiobook in The Island of Fog series. This is a mixture of post-apocalyptic fiction mixed with pure fantasy aimed at middle grade audiobook listeners. This would be a terrific audiobook series to listen to in the car or on a plane during a family vacation.

The main characters are all twelve years old and have recently left their home island where they had been sheltered in seclusion since birth. They discovered themselves to be shape-shifters. Each child has a specific form that they can change into at will.

This is where the fantasy portion of the story takes over. One child is a dragon, one is a harpy, one is a centaur and one an ogre.

The kids are needed to communicate with the creatures of Miss Simone's world, but some of them are apprehensive.

They have good reason to be worried. The harpies and dragons are constantly attacking the human villages. Dragons have even been known to eat humans.

It is up to the kids including Lauren, Hal and Dewey to travel to the dragon stronghold which is located at the Labyrinth of Fire.

Can they convince the dragons to cease and desist? Or will they end up making matters worse and starting an all-out war?

Fred Wolinksy has a talent for creating multiple distinct voices; one of the kids even speaks with a minor lisp.

The story is fast-paced and will hold the attention of even the most restless middle-grade child. It has lots of action, kids that accomplish what adults can't and lots of interesting creatures and characters. This is the perfect middle-grade adventure series.

If you haven't yet read ISLAND OF FOG or LABYRINTH OF FIRE, I suggest that you purchase these terrific audiobooks right away.

Even more compelling than book 1

This story picks up where book 1 (Island of Fog) left off. We follow the adventures of the group of shapeshifter kids as they go off on various adventures to save the fantasy world on the other side of the portals, full of fascinating creatures -- centaurs, harpies, dragons, griffins, ogres, fairies, and more.

I really enjoyed book 1, but I enjoyed this book even more. There was not the need for all the exposition and initial development in book one, and we quickly got into the action. The adventures were so clever with constant unexpected turns of events. We see the kids' continued development with both their powers and their resourcefulness. They have definitely matured since book 1. The ending is satisfying, but also hooks you into the beginning of the next adventures.

The narrator, Fred Wolinsky, continues to do a fabulous job. He creates believable and recognizable characters (and there are lots of them!) and moves the narration along full of emotion and drama.

The book is geared for middle grades and up, but I enjoyed it as an adult, and think it should appeal to anyone with a sense of adventure and fantasy. I look forward to the next book in the series!