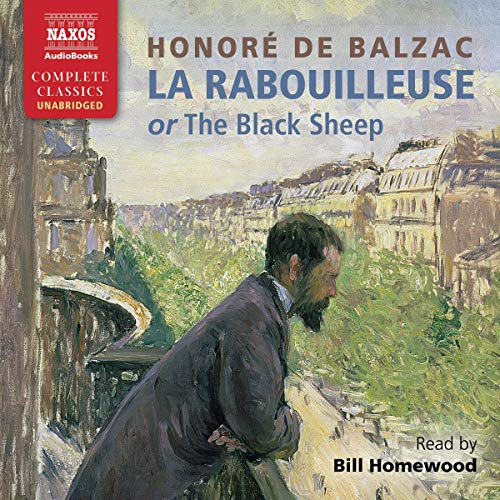 By: Honoré de Balzac
Narrated by: Bill Homewood
Try for $0.00

Brothers Philippe and Joseph Bridau are completely unalike: Philippe, braggart and soldier, formerly aide-de-camp to Napoleon, is their mother Agathe's favorite; Joseph, a poor and aspiring artist, is raised in his brother's shadow. When Agathe is reduced to poverty and Philippe accrues gambling debts, the family join forces to focus their attentions on Agathe's brother, Jean-Jacques Rouget, heir to the family fortune. The struggle for his inheritance pits the family against Rouget's beautiful maid Flore ("La Rabouilleuse"), the apple of her master's eye, and her lover, the crafty and manipulative Maxence.

Will the greedy Philippe's efforts save the family, or prove to be their undoing? Will the talented Joseph achieve the acclaim he deserves in the salons of Paris? All is revealed in the thrilling and compassionate denouement of this wonderful book. Also known as The Black Sheep and The Two Brothers, La Rabouilleuse is one of the "Scenes de la vie de province" in Balzac's La Comedie humaine.

What listeners say about La Rabouilleuse

In a way you could say I asked for it. Nobody stood over me with a ruler and said I had to read more Balzac novels or else. It was an assignment I gave myself. So when, in the first 20 minutes of La Rabouilleuse I found myself drowning in a sea of French names, I had only myself to blame. Of course, nobody stood over Balzac with a ruler either, and told him to start off this novel with exposition in the style of a telephone directory.
Fortunately the sea of names resolves quickly into a trio of characters who form the core of the novel's first part. Agathe has two sons, one a soldier and one an artist, and is living in straitened circumstances in Paris following the death of her husband. Her older son Philippe is a former officer in the army, a wastrel, thief, liar, and layabout, a gambler and a drunk: bad as he is to start off with, he gets worse as the story progresses. Agathe’s younger son Joseph is a painter, and with talent and hard work he's carved out a decent but not extravagant lifestyle for himself.

Agathe’s brother is Jean-Jacques, sole heir of their father, who could have come to her rescue many times over, but who instead has spent most of his life getting an even tighter grip on the family wealth. Jean-Jacques, a colossally stupid and shy bachelor, is being manipulated by his maid Flore and her boyfriend, the scoundrel Max. “Scoundrel” may be too weak a term for him: thief, murderer, gang leader, and sociopath might be closer to the mark.

As it turns out, Flore is the Rabouilleuse of the title. The term refers to a particular way she had of disturbing the water in her early days, when she was fishing for crabs with her uncle. “Rabouilleuse” doesn't mean “Black Sheep,” although the book’s title is sometimes given as that; a better title in English might be “Crab Girl,” which Balzac sometimes calls her.

Agathe, reduced to poverty, returns to Issoudoun to ask her brother for help. So the question of the novel turns out to be: who will get the Rouget money — Agathe and Philippe, or Flore and Max? It seems that another question will be, who will sink to the lowest depths of villainy — Max or Philippe? It's a satisfying tale as far as it goes, although Balzac applies a particularly brutal form of poetic justice.

Homewood gives his usual well-paced, precise reading, with French names so authentically pronounced as to be almost incomprehensible. (I recognize that this is my problem, not his: for some reason, my brain works in such a way that if I can't SEE the name, I can't quite “hear” it either. Fortunately many public domain English versions of Balzac are available.) His voice is rich and easy to listen to for long periods; Homewood’s narration is never boring. I will make one other observation, though. I have earphones that are strong on bass and earphones that are strong on treble. For a Bill Homewood recording, I always use my “treble” earphones.