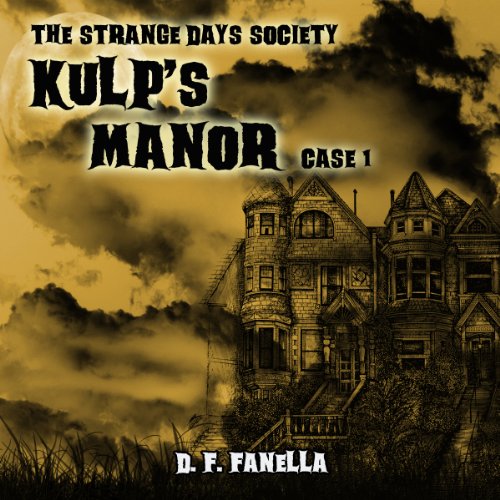 The world of the living and the dead collide in D.F. Fanella's chilling debut, Kulp's Manor. This one-of-a-kind ghost story is a satisfyingly spooky tale that may just force listeners to sleep with the lights on!

Twins Brian and Brenda have just moved to Salem's Hollow, so they haven't quite learned their way around town - or made any friends. But their decision to explore an abandoned old mansion suddenly changes all that when they run into CeCe, Bill, and Toby, the current members of the Strange Days Society.

They explain that the mansion, called Kulp's Manor, is believed to be haunted. After photographing the house for a paranormal website, they invite Brian and Brenda to join them that evening for the first official meeting of the Strange Days Society. It is there that Brenda reveals her odd secret: She can see ghosts. Excited by this discovery, the Strange Days Society decides to investigate Kulp's Manor the very next day. It is during this investigation that Brian opens the attic door to explore.

After rushing away in a hurry due to an unsettling feeling that he is being watched, the attic door remains open and releases the mysterious being that had been trapped behind it. The next week brings terror for the group as Brian, Brenda, CeCe, Bill, and Toby all encounter the manor's otherworldly inhabitants.

Realizing that they must get to the bottom of the manor's mystery, they head to the library in an attempt to unlock its ancient secrets. While there, they learn the horrifying truth about the Kulp family. In a desperate attempt to free themselves of the menacing presence they unknowingly unleashed, these five friends must band together to save those left behind-and themselves.

What listeners say about Kulp's Manor