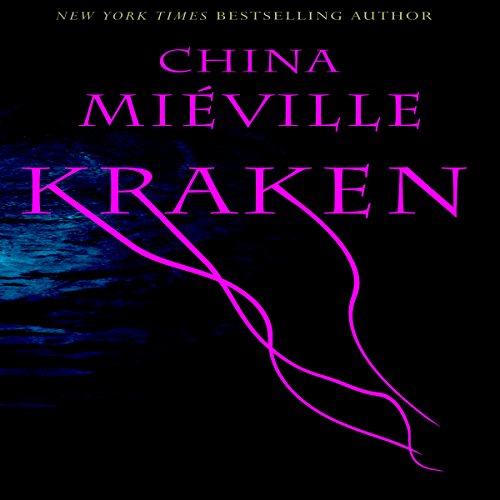 By: China Mieville
Narrated by: John Lee
Try for $0.00

With this outrageous new novel, China Miéville has written one of the strangest, funniest, and flat-out scariest books you will read this—or any other—year. The London that comes to life in Kraken is a weird metropolis awash in secret currents of myth and magic, where criminals, police, cultists, and wizards are locked in a war to bring about—or prevent—the End of All Things.

In the Darwin Centre at London’s Natural History Museum, Billy Harrow, a cephalopod specialist, is conducting a tour whose climax is meant to be the Centre’s prize specimen of a rare Architeuthis dux—better known as the Giant Squid. But Billy’s tour takes an unexpected turn when the squid suddenly and impossibly vanishes into thin air.

As Billy soon discovers, this is the precipitating act in a struggle to the death between mysterious but powerful forces in a London whose existence he has been blissfully ignorant of until now, a city whose denizens—human and otherwise—are adept in magic and murder.

All of them—and others—are in pursuit of Billy, who inadvertently holds the key to the missing squid, an embryonic god whose powers, properly harnessed, can destroy all that is, was, and ever shall be.

"Mr. Miéville's novels - seven so far - have been showered with prizes; three have won the Arthur C. Clarke award, given annually to the best science fiction novel published in Britain…. [H]e stands out from the crowd for the quality, mischievousness and erudition of his writing…. Among the many topics that bubble beneath the wild imagination at play are millennial anxiety, religious cults, the relationship between the citizen and the state and the role of fate and free will." ( The New York Times)

What listeners say about Kraken

Another classic Mieville immersion into the unconscious of London herself - but this time through the ink of a magical giant squid. And not just any giant squid mind you, but god-spawn... Join Billy the museum curator, and preserver of said deus enfant, on his horryifying and often hilarious journey through the seedy underbelly of London's secret religions. Dark magic and evil, dripping beasties spawn from every crevice as Billy tries to preserve his sanity and his life. Fans of Mieville's Perdido Street Station will feel right at home in this occult city on the brink of apocalypse(s?!). Narration of Mieville's rollicking and eerie prose performed splendidly by John Lee.

If you like Neil Gaiman, you may like Mieville. I would not describe this story so much as horror (some of Gaiman's stories are more so), but a philosophical fantasy. Kraken has less steam-punk and science fiction than some of Mieville's other stories, although it has plenty of the fantastic. It is a riot. In this story, it is centered very much in the alternate reality of the City of London, which is a major character in Kraken. If you are an architect or interested in cities, you may love it for this reason alone, but if you are interested in more intellectual sci-fi-fantasy with other influences of science and religion, you may also like it. The characters, moreover, are also more developed, or memorable, than some of his other stories. Lastly, the narration, by John Lee, is of course superb. I listened to it twice.

Fascinating, but difficult for an audio book

I absolutely love China Mieville. Perdido Street Station is one of my favorite books. I loved the story with Kraken but the plot is so complicated and there are so many characters that this is a real challenge as an audio book. I found I tended to get confused a lot about who, what, when, where. It definitely requires your full attention. Since I already have it in audio I will listen to it again, but I think it would probably be better enjoyed in regular book format.

When the giant squid star of the Museum of Natural History's collection of preserved specimens goes missing, mild-mannered curator Billy Harrow finds himself mixed up with magical gangsters, bizarre cults, occult bounty hunters, a fiendish father and son hitman team, and the stunningly ineffectual though intrepid FSRC (Fundamentalist Sect-Related Crime Unit) in an apocalyptic competition through the surreal underworld palimpsested onto London to find the missing kraken. Who took the embalmed critter and why and where are they keeping it and why is its fate wrapped up with impending Armageddon?

And that list barely scratches the surface of the mad fertility of Kraken. At times the myriad references and ideas risk swamping the reader/listener into numb fatigue, and at times the novel threatens to become a frustrating police procedural with various characters asking similar questions and getting similarly incomplete answers, but at its best, Kraken crackles along with ebullient imaginative energy, its climax is cool, and the whole work has more unpredictable twists, original plays on cultural artifacts and genre tropes, and interesting ideas about faith, science, and city-life than most genre novels dream of mustering.

And John Lee does his usual fine job, managing to keep it professional even while enjoying himself reading lines like:
"Keep something in your pocket for me to get into. So I can get to you quick."
"How'd you feel about a Bratz doll?" Dane said.
"I've been in worse."

I would call this urban fantasy, except I think it would be an insult to put it on the same shelf as werewolves and vampires in skintight jeans. But it is Urban, yes indeed. And there is a fantasy element here, an element of Gaiman. Anyway, this book is confusing, chaotic, totally weird at times and ostentatiously British. It is so goddamn British that it invents slang on the spot; plausible British slang. It also has one of the best villain duos I???ve read of in some time. Guss and Subby are totally evil, utterly cruel and disagreeable, yet somehow quite charming. This is Peredido Street Station brought back to London. This is the Rat King, only bigger, nastier and all grown up. And John Lee makes it all come alive. So if you can get past the total unwillingness of everyone, including the author to actually come out and clarify anything, the almost obnoxious rambling mysteriousness, then I think you???ll quite enjoy it. I did.

I was skeptical about this book from the mixed reviews it got. But being a fan of this "type" of book and seeing all the comparisons with one of my favorite authors Neal Gaimon I took the plunge. I am glad I did. This is an excellent story. This often funny, fast paced, and keep you guessing adventure kept me listening far later than I should have. I can see why this book has been compared to some of Neil
Gaimon's and it felt more like Neverwhere than American Gods to me. Though that being said this author has a style all his own. It should come as no surprise to fans of Jon Lee that he gives a pitch perfect performance that's easy to listen to and that he does a superb job in giving each character their own voice. Those who are easily offended will likely find something about which to find offence in this book. Mieville does use adult language and his characters say unflattering things about religion at times so be aware before you plunge in. This is not a children???s book nor is it for the faint of heart. Personally, I wish more people would be so creatively profane and was impressed by many a turn of phrase heard in this book. This book is now on my short list of books that will be listened to many times. Definitely a new favorite.

Once this book got started I couldn't stop listening. I found myself offering to do yard work and things around the house that would mean I could listen to a little more. The plot is excellent. The characters are both complex and incredibly creepy. Mieville creates this world that is just a tiny bit strange and those little things make all the difference. It's believable enough that it's even scarier. Fascinating, fast paced, and keeps you guessing.

This novel could be seen as a parody of Harry Potter, but for grownups. The hero enters a world in which every supernatural fable in the popular canon is in play--including Star Trek! More smoothly plotted than some of Mieville's other work, it's a very fun listen/read, especially since the narrator serves up all manner of London accents.

I just can't get there from here

I loved Perdido Street Station and The City & The City 5 stars for me, and was thrilled to see China Mieville's Kraken. I so wanted this to work, and with John Lee how could you miss? [does Lee ever take a day off?] I struggled with the plot and never could get my arms around it. I just ended up confused. Could be I listen in the house and in bed - possibly this one requires the focus of a solo car ride. I've tried to start it again mid-way several times with no success, but I don't have the strength to start again from the beginning. Have to let it go.

This book will either excite you are bore you. If you are into anything and everything Science Fiction and really like "out there" stories, you should settle into this really well. There is a little something for everyone in this book and the characters, plot and crazy sub-plots (think cockroaches on strike) all make this surreal story even more interesting with each passing chapter. I am really sorry to say this book was read by the wrong person (sorry John Lee!). While it was well read, the characters and delivery just made this already hard to follow book even more difficult. I think if someone like Neil Gaiman read this it would have been much better. Be prepared to listen intently to this book... if you miss even a few sentences you might miss some very important story details.