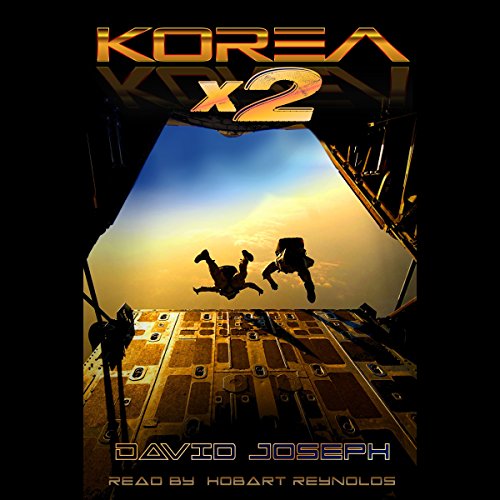 The Korean CIA Director is killed by a North Korean assassin. Counterfeiting, drugs, and weapons of terror finance the North Korean government. Three Air Force Pararescuemen and a CIA Officer join with the South Korean 707th Brigade and a team of female assassins to form a team known only by President Reagan and CIA Director Casey, as "the Silent Six". Their task: the destruction of the North Korean gangster regime. "The Silent Six" is the ultimate Special Operations Team.

Poorly written, poorly performed, not worth listening to.
The narrator with a monotone voice adds nothing to a story that REALLY needed some help. The story is very poorly researched and equally poorly written.

What did you love best about Korea x 2?

What was one of the most memorable moments of Korea x 2?

The opening scene when Sam Young pulls the pilot up the side of the rock.

Have you listened to any of Hobart Reynolds’s other performances before? How does this one compare?

No, but enjoyed his clear, concise narration.

I did! I listened to it while driving to Denver. It made the entire drive unforgettable!

I saw a promotional Tweet saying Korea x2 has the "best military freefall scene every narrated." It is true! An exciting nonstop action Special Ops narration!