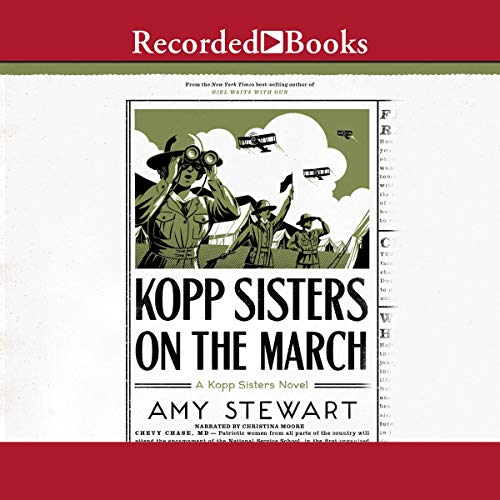 Kopp Sisters on the March

By: Amy Stewart
Narrated by: Moore Christina
Try for $0.00

In the fifth installment of Amy Stewart's clever and original Kopp Sisters series, the sisters learn some military discipline - whether they're ready or not - as the US prepares to enter World War I.

It's the spring of 1917, and change is in the air. American women have done something remarkable: They've banded together to create military-style training camps for women who want to serve. These so-called National Service Schools prove irresistible to the Kopp sisters, who leave their farm in New Jersey to join up.

When an accident befalls the matron, Constance reluctantly agrees to oversee the camp - much to the alarm of the Kopps' tent-mate, the real-life Beulah Binford, who is seeking refuge from her own scandalous past under the cover of a false identity. Will she be denied a second chance? And after notoriety, can a woman's life ever be her own again?

In Kopp Sisters on the March, the women of Camp Chevy Chase face down the skepticism of the War Department, the double standards of a scornful public, and the very real perils of war. Once again, Amy Stewart has brilliantly brought a little-known moment in history to light with her fearless and funny Kopp sisters novels.

What listeners say about Kopp Sisters on the March

The Kopp Sisters series is so well written and I LOVE the narrator. I never got confused on any of the characters. I have listened to all five books. I can't wait for the next book in the series called Dear Kopp Sister. It will be out in September.

Amy Stewart takes her characters to new surroundings and tells a great story. I did not want to stop listening. And the narrator is simply perfect.I can't wait for Book 6.

I love this series! A great historic introduction to little known past events and people. Can’t wait for the next in the series!

Again, love her stories about the Loops sisters. I hope Any Stewart will continue with another book. I highly recommend her series. The narrator was fabulous.

another great Kopp sisters book
Keep them coming Amy. Love them all. can't wait for the next one

The Kopp Sisters Keep Getting Better!

Best novel yet from Kopp Sisters series! I'll admit I was kinda dubious about the 1st book when I first started it. But I am completely hooked and only want to know more about these sisters' stories! Its set in the early 1900's in New Jersey. This fictional history follows the real life story of three sisters. The eldest in novel 1 (Girl Waits With Gun), learns to defend herself and sisters from being harassed. And then becomes one of the first female deputy sheriff in American History. The social climate and general public's very definite opinion on a woman's place and duty is made crystal clear in novel 1 and following novels. The 5th novel is set leading up to America's involvement with WWI, and thru the progression of the story you see the subtle shifts in social climate.

If you have not read the Kopp Sisters series you need to. They are historically accurate and entertaining.