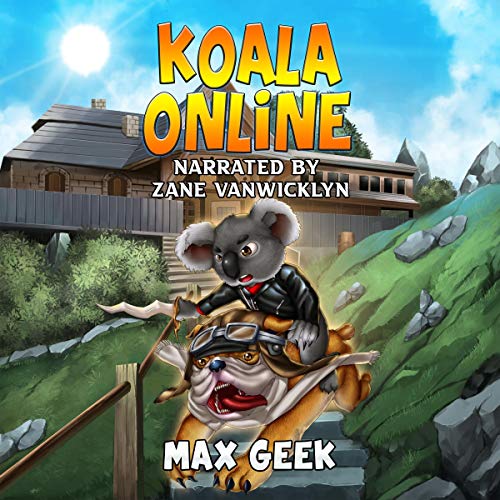 By: Max Geek,Marcus Sloss
Narrated by: Zane VanWicklyn
Try for $0.00

A daring koala named Ranger experiences an exciting life in his youth. His adventures return him to his beloved Dallas Zoo. His fame makes him the star attraction until his prowess fades. Time flies in his enclosure as he ages. No longer a bold spry hero, the bitter old koala becomes tired and bored.

His handler, Barbra, takes him out of the zoo to help her daughter, Tiffany, connect with reality. Tiffany is addicted to a virtual life, preferring to live her life inside her gaming pod. Prohibited from playing for a visit, and left to bond with a koala in real life, she does the unthinkable. She skips their bonding time to insert Ranger into Myriad Online.

Oh, teenagers and their love for gaming. Her thought process was Ranger could earn her some coins while she does chores. Wrong. Ranger transitions during the upload, becoming trapped in Myriad Online. The first animal to be converted into a character in gaming history.

Twisted fate deals our furry friend a new hand. Ranger is altered by an evil AI. By day he plays a human character. By night he reverts back to his koala form, assigned as an NPC mayor in charge of improving a run-down outpost. Join Ranger as he quests to earn gold, build his base, and adapt to his new digital life.

What listeners say about Koala Online

Amazing! I loved it so much!

I totally recommend this book to any fiction, game, or LIT-RPG lovers! My favorite audiobook by far! The narrator really brought a performance to this book! I fell in love with ranger’s character. I laughed about a million times! 😂

Narrator too young to be effective

My grandson loves this story, but it's all I can do to listen with him. The boy narrating it has no voice inflection or drama. Just reading from the pages.

Koala Online is a very kid friendly LitRPG book. The Narrator Zane is interesting to be sure but the voice seems to fit well.

This story and this narration are both superb. Because of that, I will be buying and listening to every other story by this author and narration by this reader. The story is lively and enchanting, and the narration really brings it to life. Moreover, this story/reading have made me a confirmed audible customer for other books. I had tried audible several times without being grabbed but then this one grabbed me. Heartily recommended.

Kid friendly and a ton of fun

Wow, it isn't easy to find kid-friendly gamelit, but this audiobook fits the bill perfectly. it is a joy to listen to, and it will make you laugh and smile the whole way through. The narration is extremely charming. You will freaking love it. Get this audiobook now!

Been playing this for my kids and they are loving it. (Me too). Enjoyable performance and good story. i smiled quite a few times.

Amazing narration of a wonderful story!

The narrator of this story brought every single sentence to brilliant life. That is magical!! Reading a story to a listener is easy. But this narrator did so much more. He brought me along on the journey of this amazingly written tale and I loved each and every moment. Kudos to everyone involved and to Mr. VanWicklyn....outstanding! Can’t wait to hear what you and this author have in store for us next!!