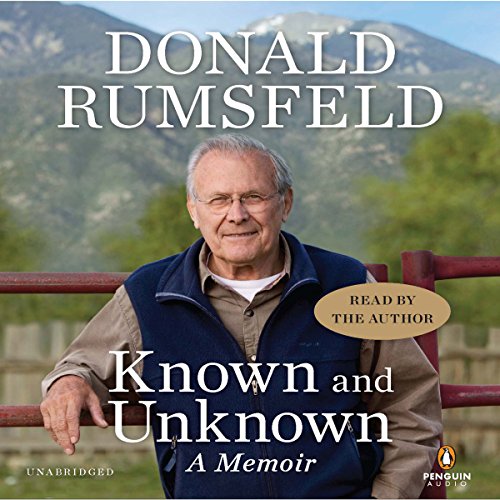 A powerful memoir from the late former US Secretary of Defense Donald Rumsfeld.

With the same directness that defined his career in public service, Rumsfeld's memoir is filled with previously undisclosed details and insights about the Bush administration, 9/11, and the wars in Afghanistan and Iraq. It also features Rumsfeld's unique and often surprising observations on eight decades of history.

Rumsfeld addresses the challenges and controversies of his illustrious career, from the unseating of the entrenched House Republican leader in 1965, to helping the Ford administration steer the country away from Watergate and Vietnam, to the war in Iraq, to confronting abuse at Abu Ghraib. Along the way, he offers his plainspoken, first-hand views, and often humorous and surprising anecdotes about some of the world's best-known figures, ranging from Elvis Presley to George W. Bush.

Both a fascinating narrative and an unprecedented glimpse into history, Known and Unknown captures the legacy of one of the most influential men in public service.

What listeners say about Known and Unknown

Inside view of five decades in politics

Rumsfeld is such a polarizing figure in American politics, that I know it will be tempting for some to rate this book on whether they agree or disagree with his views. Set that aside. Whether one agrees or disagrees, it's simply a riveting look at the world of politics from an insider's point of view. Rumsfeld does a great job of reading his own material, so much so that it really feels more like listening to a storyteller in the old fashioned sense. Enjoyed it tremendously.

I have never been a fan of Rumsfeld but this is an excellent book that covers a great deal of our history for the last several decades. You get no sense that he is rewriting history to make himself and the Bush administration look better but you realize if they could have been this open at the time, they would not have lost support like they did. Sadly the necessities of war often do not allow that openness when it is needed.

No ax grinding or score settling. Just what appears to be a very honest assessment of the history he was part of.

Rumsfeld is an excellent narrator on this. He does a better job than some of the professionals on other books I have listened to.

Highly Informative about US Government Work

I listened to ALL 4 parts of this engaging narrative that was written by a master speech writer, analyst and a politician. I learn more than I expected from a book about military matters. It contains history, politics and drama of human relationships within the Government, Governmental teams, and human family. It is written by an outstanding member of our government. It is the most informative book on the matters of War and Peace in our Times. It might become a text book for our future leaders: politicians and military. It could be downgraded only by dogmatic democrats. Any mature reader of this book would be proud to have Donald Rumsfeld caliber intellect in our government.

First off, when you listen to this, you feel like you are having a 1x1 conversation with Rumsfeld. This audio book conveys his emotion, tone, and personality! Some parts of this book are down right hilarious, but it's clearly not supposed to be hilarious. Second, there is a lot about Rumsfeld that I didn't know about, but I found very interesting. I am sure the list of people with federal experience comparable to Rumsfeld would be VERY short. There is a lot more to him than the Bush years.

There were many parts of the book that were addicting and had to sit in my car to wait for a chapter to finish. It's a very long book and it probably took me a month to get through it. I am very pleased with this book and highly recommend it.

A great story and a history lesson to boot

I have really enjoyed listening to Known and Unknown. Didn't really know what to expect because Rumsfeld has been so demonized by the media, but Rumsfeld opens up and gives us a view into his life. He talks about the admirable traits and the warts that our leaders have.

It is an exciting book, well written and easy to understand and filled with interesting stories behind the scenes of many great events in our modern history. Important to read to understand events taking place today.

A Long Slog, but Highly Informative

This is an excellent, thoughtful and insightful account for anyone with an interest in how the US government works at the highest levels. Don Rumsfeld???s government service in influential positions began during the Presidency of Lyndon Johnson and continued through his service as Defense Secretary to George W. Bush. What emerges is a picture of high-level policymaking based on incomplete information, evolving facts, good-faith differences among Cabinet officials, and subject to pressures from damaging news leaks, often-inaccurate news reports and partisan opponents, as well as the changing mood of public opinion. Throughout his account Mr. Rumsfeld offers his personal critiques of colleagues he differed with on particular issues and of policy choices that were made. He does not exclude himself from such criticism. However, the book never descends into personal attacks or attempts to ???trash??? his former colleagues. Rather, the critiques appear more in the nature of explaining why he felt things could have been done better or why a colleague???s statements or actions were ???unhelpful,??? as he often liked to say.

There are opinions he shares in this account with which many will disagree. His defense of the decision to go to war against Iraq is one such example. He points out, however, that the critics of the war have to answer whether we would be better off with the alternative: a Saddam Hussein regime still in power and having reactivated its WMD programs in clear defiance of UN resolutions. I personally was not persuaded by his criticism of Jerry Bremer???s early decision when on the ground as the Coalition administrator in Iraq to slow down the pace of the handover of government to the Iraqis.
I think Bremer may well have been right to be concerned that handing over power too early to an Iraqi group not equipped to govern might have resulted in something like the ???Weimar Republic??? that led to disaster for Germany in the 1930's

So now I know

I told a liberal friend of mine that I was listening to this book -- and got the predictable look of horror. I cannot understand why we live in a day when the memoirs of a person who played such a pivotal roll in our history are rejected out of hand. Give the book a break. This is not a political hack. It is not only real history, it will be a source document for historians long after we are dead and gone. Be intellectually honest enough to read/listen to both sides -- not for some polemical reason, but just to learn what really happened. And, even if you don't agree with how Mr. Rumsfeld interpreted his own historical experiences, you can at least understand how he saw them. Then, knowing will make you more informed, and that's what our country needs -- an informed electorate.

A Must Read of American History

A fascinating recount of a primary figure in politics, business and warfare. Rumsfeld doesn't mince words and gives a rather detailed account of his life and the decision making that led him to make the numerous important choices that he had to throughout his differing occupations/positions.

This is a remarkable account of the reality of the political/military/social aspects and therefore an undrstanding of the actual happenings of many events, particularly of those following 9/11. Regardless of one's political convictions, this is a must read. Very believable and clearly presented.

I don't agree with everything Rumsfeld did during his time as secretary of defence. But it was interesting to hear from the man himself regarding his career before and during the Iraq War. I do like the fact you can read his memorandums through The Rumsfeld Papers website along with this audiobook, which is greatly appreciated. This is worth a listen too, like him or not.

An erudite narrative rich in detail, information and the methodology behind diplomacy at the highest level. Rumsfeld’s narration is also excellent and captivating from the start. For me personally, having studied history, philosophy and political science, I could not have asked for a more enjoyable listen; I learnt a lot.