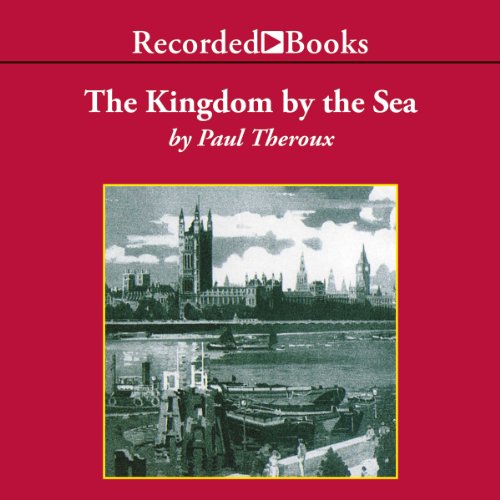 Kingdom by the Sea

American-born Paul Theroux had lived in England for 11 years when he realized he'd explored dozens of exotic locations without discovering anything about his adopted home. So, with a knapsack on his back, he set out to explore by walking and by short train trips. The result is a witty, observant and often acerbic look at an ever eccentric assortments of Brits in all shapes and sizes.
©1983 The Cape Cod Scriveners Company (P)1990 Recorded Books, LLC

What listeners say about Kingdom by the Sea

Not Theroux at his Best, but still a Worthy Listen

I'm a fan of Theroux's travel writing, and almost didn't pick this one up after listening to the sample and reading the complaints from the other reviewers about how the British narrator created confusion since Theroux is American.

However, something you may not know about Theroux (I did not) was that he had lived in England for 11 years prior to writing this piece, and the introduction states he had even picked up an English accent. While I'm sure it was not as pure as the narrator's, simply knowing this bit of information helped put me at ease. In addition, Ron Keith is a fine narrator who performs a wide range of regional and class-based accents during the reading, and these accents helped give a sense of where Theroux was, and who he was speaking with, at any given time. This would not have been possible with an American narrator.

As for the content, it is important to remember that this book was written in 1983, when many of the coastal communities in the United Kingdom were in steep decline. Theroux purposefully avoids the touristy spots, not entering even a single castle. Most of his encounters are with the working classes, so this travelogue has a gritty feel to it that one would not get from, for example, Bill Bryson's book (which I found a bit saccharine, as much as I enjoy Bryson).

That said, something about this book left me wanting. I'm not quite sure what is missing here that is present in Theroux's other books; he visits another writer (Jan Morris), and comments on others (some information on Orwell I found particularly interesting). He doesn't comment much on what he is reading, if anything on his journey, and as I write this I've realized that he doesn't describe much "down time" in general, when he's huddled in his room or in a pub at the end of the day -- this travelogue is almost all movement, and thus has a somewhat exhausting feel to it. Theroux feels like he's in a hurry, and you, as reader (or listener), get dragged along with him.

Mind you, Ron Keith is a fine narrator - but he's so miscast as the American protagonist that Kingdom by the Sea is irretrievably sunk. Theroux's book is no mere travelogue; it's an outsider's wryly affectionate study of a foreign culture. The producers of the audio book completely miss the point: Imagine an American's observations on Brits and Britishness - voiced in the first person, but in a British accent. The result is ruinous confusion: an Englishman seems to be studying Englishmen and their oddly foreign ways. What's next for this producer? Casting Kate Hudson to narrate an autiobiography of Winston Churchill?

This book is ruined by the narrator

One has only to compare this book with Bill Bryson- who also writes travel books as an America Ex-pat. He has picked up a bit of a British accent, loves Britain, but sees the absurdities.
This narrator instead of fond irony sounds smug and deprecating.
I think I may get the book and try again-in general I have loved Paul Theroux,

Just plain grating, and it was really hard to synthesis the British voice with the american point of view,.

Was Kingdom by the Sea worth the listening time?

Why ruin a good book ?

Paul is not a happy man.

A much better story.

What could Paul Theroux have done to make this a more enjoyable book for you?

Portrait of an Island and a People

This is an intricate portrait of England, Scotland, Wales and Northern Ireland, revealing much about the country and its people. The only drawback is that it's dated - set very much in the time he took the journey. I'd love to encourage him to retrace his steps to see what's changed and what hasn't - just as he did in "Ghost Train to the Eastern Star" (retracing, as far as possible, his route in "The Great Railway Bazaar"). Both of those books, as well as his other maginifcent travelogues, are highly recommended.

We planning a trip to the uk this year, but after listening Theroux, we have changed our minds. Don’t buy this book unless you want to hear how dirty the uk is, and how rotten the natives are.

a dull country full of dullards

I really tried to get into this, but the country itself just isn't interesting. I got a refund. This is perhaps Paul's least interesting work. Somehow the country that got us all speaking this language must have something redeeming to write about, but it wasn't in this book.

I SO wish I'd read the previous reviews before downloading this - It's a pretty awful book anyway - with a horribly petulant tone/alternating with his maddeningly twee habit of making up silly names for the strangers he meets and the otherwise brilliant Theroux should be ashamed of it.
But the narration!! it's the least professional job I've ever heard. Ron Keith's attempts at regional accents are nothing short of hilarious - but ultimately EXTREMELY annoying. In the end I just managed to get though the book by seeing the funny side. In the Newquay section, listen out for the sound of his stomach rumbling and the faint sound of a two women's voices chattering away in the background. Highlights are the South African and Bristolian accents and the fact that he can't pronounce any place names south of Bridlington (Margit, Ramsgit..) Truly bad in every way

The book is without doubt another of Mr Theroux's fantastically observed pieces. However, I am afraid that the narration completely ruined this audible book for me. Definitely one I'll stick to reading.

I did not enjoy this and in fact gave up on it. I found Paul Theroux's contempt for everyone he met somewhat wearing - I just wish he'd stayed at home! The narrator's voice was fine when he spoke in his own gently Yorkshire voice but his accents were TERRIBLE! Even Cockney was beyond him and Devonian - well!

The book says more about this patronising writer than it does about the subject matter.

The people & the places.

Paul Theroux knows how to describe the people of Britain. With wit & charm he explains why we are British whilst traversing the coastline of this fair isle. Brutal honesty is his bag! Funny & informative.
A joy from start to finish.

A Good Book but let down by the reading

I enjoyed this book when I first read it, way back in the 80s. It has dated rather, and Theroux makes some fundamental mid judgements about Britain. But I would have enjoyed it so much more as an audio book with better voicing. An American reader, for example? Someone who could make it live.

Having read the book a few times over the years I thought I'd invest in the Audible version as well. The narrator is hopeless at accents which is bizarre considering the verbatim reporting of his casual encounters en route form an important part of the narrative. Mr Keith is as distant from an Anglicised American as it's possible to get and although I don't expect narrators to do impressions of authors his delivery was so far from what I expected as to take most of the pleasure from the story.

Get a different narrator. I can just about stand his clipped public school type accent (even though he is playing the part of an Anglicised American) but when he changes speech to convey the conversations of the locals that he meets on his way around the coast they all sound exactly the same - and that is as a straining (constipated?) Brummie - about as far from the coast as you can get. It's all a bit superior and condescending

Would you be willing to try another one of Ron Keith’s performances?

This book was interesting but could not be described as uplifting. Partly this is due to the period that the author went on his journey, the Falklands war and the country in recession but also the writing style. Paul Theroux is very good at portraying sadness, neglect etc but not so good at portraying those parts of the coast that he found beautiful, uplifting and enjoyable. I also think that making up fictional names for the people he met along the way allowed him to stereo type them and this was clumsy and detracted from the journey. This also added to the negative feel of the book. I have downloaded another book by the same author but I'm not sure if I am brave enough to listen to it.