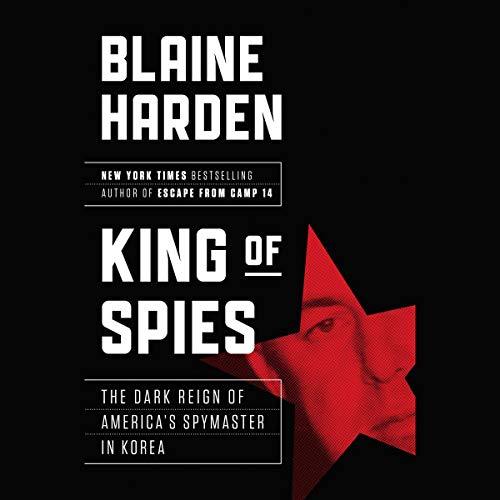 By: Blaine Harden
Narrated by: Mark Bramhall
Try for $0.00

The New York Times best-selling author of Escape from Camp 14 returns with the untold story of one of the most powerful spies in American history, shedding new light on the US role in the Korean War and its legacy.

In 1946, Master Sergeant Donald Nichols was repairing jeeps on the sleepy island of Guam when he caught the eye of recruiters from the army's Counter Intelligence Corps. After just three months' training, he was sent to Korea, then a backwater beneath the radar of MacArthur's Pacific Command. Though he lacked the pedigree of most US spies - Nichols was a seventh-grade dropout - he quickly metamorphosed from army mechanic to black ops phenomenon. He insinuated himself into the affections of America's chosen puppet in South Korea, President Syngman Rhee, and became a pivotal player in the Korean War, warning months in advance about the North Korean invasion, breaking enemy codes, and identifying most of the targets destroyed by American bombs in North Korea.

But Nichols' triumphs had a dark side. Immersed in a world of torture and beheadings, he became a spymaster with his own secret base, his own covert army, and his own rules. He recruited agents from refugee camps and prisons, sending many to their deaths on reckless missions. His closeness to Rhee meant that he witnessed - and did nothing to stop or even report - the slaughter of tens of thousands of South Korean civilians in anticommunist purges. Nichols' clandestine reign lasted for an astounding 11 years.

In this riveting book, Blaine Harden traces Nichols' unlikely rise and tragic ruin, from his birth in an operatically dysfunctional family in New Jersey to his sordid postwar decline, which began when the US military sacked him in Korea, sent him to an air force psych ward in Florida, and subjected him - against his will - to months of electroshock therapy. But King of Spies is not just the story of one American spy: With napalmed villages and severed heads, high-level lies and long-running cover-ups, it reminds us that the darkest sins of the Vietnam War - and many other conflicts that followed - were first committed in Korea.

"A good yarn and a timely one - appearing as Americans are once again pondering the possibility of war with North Korea." (Mary Louise Kelly, Washington Post)

What listeners say about King of Spies

Great audio book if your into history and. war!

Awsome book that definitly keeps your attention and expounds on a man and his unique war experiences and history.

A brutal look into how Donald Nichols, an Air Force mechanic with a 7th grade education, became the most feared, controversial, reviled, and revered Spymaster in US military history! Not a feel-good story by far. Given an environment of unchecked power, and indiscretion, held an iron grip on subversion, and intelligence gathering before/during/after the Korean War. I enjoyed how the author toyed around with Nichols' proneness to hyperbole.
This book challenged my knowledge of the Korean War, and exactly how close the Soviet, and then Chinese backed North Korea pushed the US, and their many poor decisions to a crushing defeat. Thoroughly enjoyed this Audible book!

pretty much binged this entire book from start to finish and loved it. my retired dad taught English lit and isn't much into military history, but loved this book as well.

I can see why the N Koreans don't like the US

Having lived in S Korea for 7 yrs, I got to know a bit about their history and their natural distrust of foreigners - this guy epitomizes the term "ugly American".