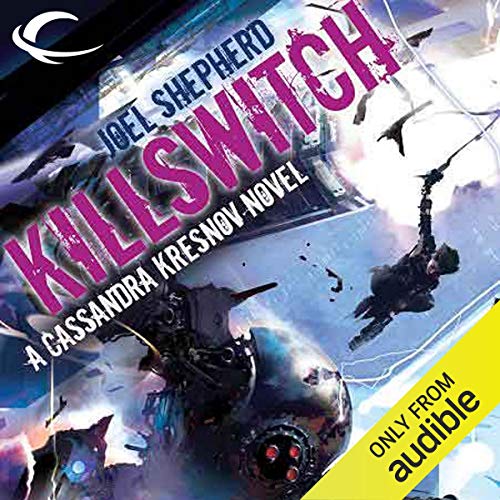 By: Joel Shepherd
Narrated by: Dina Pearlman
Try for $0.00

Two years after the un-hatching of Callayan President Neiland’s plot to make the capital city of Tanusha the center of the Federation, Callay is under siege. So begins the third installment of this gripping trilogy from an exciting new sci-fi author.

A powerful faction of conservative Fleet captains has surrounded Callay, at Earth’s behest, and is threatening a blockade - or worse. A fearful Earth does not wish to lose direct control of its precious war machine, and there are fears of civil war. All that Callay has to oppose the warships of the Fleet is the Callayan Defense Force (CDF) - a newly formed group of raw recruits led by a politically hamstrung general. However, the CDF is largely trained and organized by Major Vanessa Rice and her best friend, Callay’s combat-android, Commander Cassandra Kresnov. But when Cassandra’s lover, Special Agent Ari Ruben, discovers a plot to kill her using a killswitch, which her old masters in the League built into her brainstem, Sandy is forced to go underground to stay alive.

Joel Shepherd is the author of Crossover and Breakaway, the two previous novels in the Cassandra Kresnov series. Born in Adelaide, South Australia, in 1974, he was raised in Perth in Western Australia. He studied film and television at Curtin University but realized that what he really wanted to do was write stories. His first manuscript was short-listed for the George Turner Prize in 1998, and Crossover was short-listed in 1999. Visit Joel Shepherd's website at www.joelshepherd.com.

What listeners say about Killswitch

I love this author and this series.

The story has great depth of writing and lost of action. The writing reflects a lot of background gained from the authors time living in India and other southeast Asian nations. The author hails from Australia were he lives now. When younger that author won a few awards for this very series. There is a lot more depth to this series than the Mich Rap, Gray Man, or other like series's ( I have listened to them all).

Dina the narrator does a great job as usual. She is one of my favorites.

According to the author the next books in the series are supposed to be out in September 2013. However, there is no timeline for the audio-books.

I greatly prefer this series to Tom Clancy's current works which have began to show too much political bias.

Yes, It holds your attention and has a plausible storyline

What other book might you compare Killswitch to and why?

The other Cassandra Kresnov novels

The assault on the orbital station

On to the next title and looking forward to another excellent listen and humanity lessons learned.

Aside from some mispronunciation, it was a great read! I read the series several times in hardback form. But it was great to relive this world. I hope Joe shepherd revisits this Someday.

Good narration and character development but too much foul language and sexual content got in the way of a good story.

A fitting end to the first trilogy.

Would you consider the audio edition of Killswitch to be better than the print version?

I've not "read" any of Joel Shepherds books, I discovered him through the good graces of Audible and having a credit burning a hole in my virtual pocket.

If you’ve listened to books by Joel Shepherd before, how does this one compare?

As always there is that fascinating south asian fusion that Joel fills the background with. But the confusing repetition of Callay (the planet) the Xiaobahn/Shoban* River Delta (the region) and Tanusha (the city) can make it harder work than it need be to keep track of where the action is. The politics of the world, always a consideration for the author is fully realised. Although the blind insistence of the SIB a government security agency (a somewhat less than competent CIA analogue if you will) that they must doggedly harass the main character is grating. As they seem like one trick political ponies, rather than a real threat to Cassandra Kresnov and her allies in the defence force. As you may have realised there more politics in this one than the previous two, and as well as the local stuff on Callay there is the wider schemes of the Federation and League coming to a tentative post-war peace (of sorts) and the moving of the Federation capitol to Tanusha.

There isn't one scene but the fact that "civilianisms" keep on suprising Cassandra is delightful. Such musings as on the difficulties of having long hair when you need to access an interface implant. We also see just how dangerous high-designation GI's are when working together "It's just no fun" as Rhian Chu one Sandies few surviving Darkstar squad mates puts it upon dispatching a rogue automated tank.

Rhian Chu's reaction to the threat against the children in the Hacienda. Sandy might be the planets most dangerous soldier but Rhian is like a tiny asiatic mary poppins, if mary poppins was a lethal combat android/gynoid and had access to automatic weaponry.