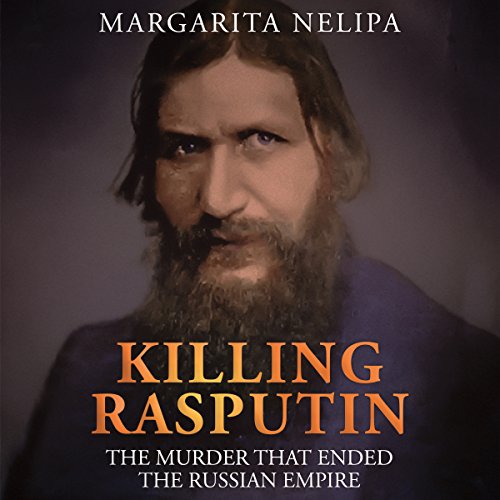 By: Margarita Nelipa
Narrated by: Sara Morsey
Try for $0.00

At last a book about the so-called "Mad Monk" of Imperial Russia that lays to rest the myths and reveals the truth about one of the most controversial characters in human history while exploring the impact his murder had on a dynasty, a people, and a country.

Written in three parts, Killing Rasputin begins with a biography that describes how a simple unkempt "holy man" from the wilds of Siberia became a friend of Emperor Nicholas II and his empress, Alexandra, at the most crucial moment in Russian history. Part two examines the infamous murder of Rasputin through the lens of a "cold case" homicide investigation. And lastly, the book considers the connection between a cold-blooded assassination and the revolution that followed; a revolution that led to civil war and the rise of the Soviet Union.

Unique about this book on Rasputin, is that the author combines Russian heritage (her parents were forced out of Russia during World War II and arrived as refugees in Australia in 1948) with medical science and legal training. Nelipa relied on Russian-language sources that she translated rather than depend on the interpretations of others. Her primary sources include police documents and witness testimonies, an autopsy report, diaries, letters and memoirs written in their native language by the participants in these historic events. Secondary sources include Russian-languages newspapers and other publications from that era. The narrative is copiously referenced and augmented with documents, some of them published here for the first time.

Step into the imperial court of a 300-year-old dynasty in its final days with one of the most fascinating characters ever to grab our imaginations, judge whether Margarita Nelipa makes her case regarding his death, and if you agree that it was "the murder that ended the Russian empire".

What listeners say about Killing Rasputin

Wow, I learned so much!

Killing Rasputin: The Murder That Ended The Russian Empire
by Margarita Nelipa

I got this from Freeaudiblecodes and I learned so much! I can't say I was an expert in history anyway but what I did read about in books did not cover any of these details!

Other books made Rasputin as a real creep and some how deserved what he had coming to him. He was really a traitor to the Royal family. All that is rubbish!

This tells of a simple man who believed in herbal healing and fiercely loyal to the Royal family which made other factions very angry.

It describes how he died and myths around it. Lots of debunking going on in this book! Great information and explained in an interesting manner!
Narration was excellent!

Nelipa's research is beyond question and anyone wanting every detail about Rasputin's killing won't find a better work. Therein lies the problem. There were hundreds of details I found unnecessary to the story. This person walked and turned left, the dimensions of bridges, document numbers, and on and on. Those are details better for footnotes or left out altogether. CSI fans may like this, but the reader looking for a basic telling on Rasputin's bio and killing may find themselves struggling to make it through to the end. I highly recommend this author edit and reissue to match the first couple of sections on Rasputin's bio.

This book really shouldn't be a straight audiobook. You loose too many great visuals!

Would you be willing to try another book from Margarita Nelipa? Why or why not?

I would be more than happy to try another book from Margarita Nelipa, just not an audiobook. Now that I understand what a scholar she is, I don't want to give up the multimedia experience.

Was Killing Rasputin worth the listening time?

Yes, Killing Rasputin was worth the listening time, I just hope I retained something!

I have figured out the problem with this book: it was published and marketed all wrong. While listening to this book on my commute, I kept having flashbacks to my freshman year of college, when I used the old Annenberg The Western Tradition lectures as part of my coursework. That is because Ms. Nelipa's work is scholarly, not so much popular. Had this book been published by a university press, available through institutions of higher learning, no confusion would exist. Instead, it was published by a more popular press, and so confusion abounds. Because you lose out on the photographs and source material, audio-only is not the best format for this book, either. It's a great work, and I highly recommend it-- just not as an audio book for the casual true-crime aficionado's commute! Students of Russian history or politics are another matter. They are the audience, and they won't be disappointed (just get the print edition so you don't miss anything). I received this book for free because of a Goodreads Giveaway. It is an Audible Audio Book.

How a book about a fascinating event in a fascinating time can be so boring is beyond me. Poor narrator doesn't help.Repeating same info over and over doesn't help. The worst thing is Nelipas habit of never describing an event from start to finish. Sometimes she starts in the middle some times at the end of the event. I wanted to scream. I take exception to the title of this book. The aristocracy in Russia work long and hard to cause their downfall ,so I don't think we can blame Rasputin. Miss Nelipas should listen to Great Courses RUSSIAN HISTORY . I don't go along with this white washing of Rasputin .I'm sure most of the tales about him were grossly exaggerated, as is true of other bad guys in history, like the Borges and the Claudians. Still he probably was no saint.