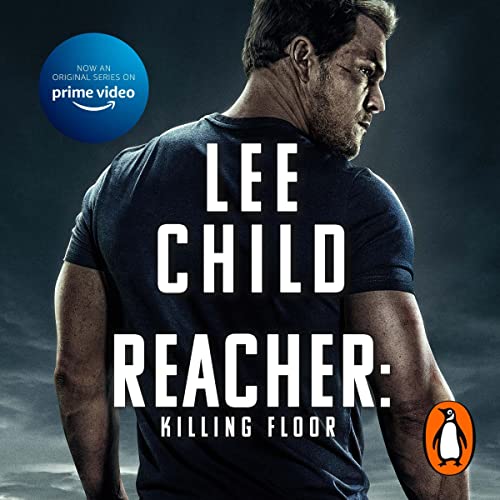 Killing Floor is the first book in the phenomenal best-selling Jack Reacher series by Lee Child. It introduces Reacher for the first time, as the tough ex-military cop of no fixed abode. Trained to think fast and act faster, he is the perfect action hero for when times get tough.

Margrave is a no-account little town in Georgia. Jack Reacher steps off a bus and walks fourteen miles in the rain to reach it, in search of a dead guitar player.

But Margrave has just had its first homicide in 30 years. And Reacher is the only stranger in town. He seems the obvious fall guy. As the body count mounts, only one thing is for sure: they picked the wrong guy to frame for murder.

Although the Jack Reacher novels can be read in any order, Killing Floor is the first book in the internationally popular series.

"Races along, spattering blood and body parts on the way." (Sunday Telegraph)

"These books are absolutely addictive. When you pick them up you can't put them down." (George R.R. Martin)

"All [Reacher thrillers] are ripping yarns, but since this is the first, it seems the logical place to start." (Stephen King)

What listeners say about Killing Floor

Disappointing after hearing so much about Reacher.

What disappointed you about Killing Floor?

Every conversation was written with "I said" "he said" "she said", all the way through the book. I was expecting more sophisticated language.

Has Killing Floor turned you off from other books in this genre?

Not the genre, just Lee Child.

Disappointment due to the lack of imagination about the language.

I only finished this book because I was curious how it ends. In the most of it the narration sounds like shopping list or user manual being read out loud. Gets little better in the second half but still not very pleasant experience.

The whole book would be one third in length if ‘I said, he said’ and repeating phrases were excluded. The narration did not help as well, the worst combination possible. It was like reading out loud a TO DO list.

He said she said

The “he said she said “ though out the story was very off putting and I felt spoiled the overall story and was not really required .

I did enjoy the book

The book is written in I format and the readers voice does not match the figure in the books age, persona or way of talking. Story awesome, but read it yourself.

macho classic. makes the movie look like a spoof.

l love Jack Reacher. 6ft 4 with a look that gets him into trouble without even trying. He is a credible and likeable hardman. Basic to the bone. Sympathetic but scary. Reacher is always the hero without any fanfare. How anyone decided to replace a bulky 6ft 4 , ex army hardman with 5ft 2 (in lifts) Mr Cruise with perfect teeth and coiffered hair is beyond me. I love the books. When I heard who was cast for the movie I literally felt sad for the character. Damn you Hollywood. Why can't you just tell it like it's written???

Fantastic story, but if a character like Finley was in story - in other books of the series, and the unnecessary blaspheming the Man Who came and died for me, and rose again, if he blasphemed Muhammad, his head wud be cut off. But the saddest thing is that swearing doesn’t bother us too much, but against my Saviour and Lord, is just unbearable and hurtful

Narrator does not do the author justice

The narrators voice is extremely monotonous. I have read the book, find it much more entertaining than the audible version.

Faithful narration to the very last "he said"!

When reading this book I never noticed how many times "he said" "she said" "he said" is written down.
Having fetched my twenty year old copy of the book I can confirm they are all there in black and white. On the page I must have stopped seeing them, how I wished I could stop hearing them in the audio version.

Maybe we need a new category - 'Unabridged except for removal of superfluous and flow interrupting he said/she saids'?

Otherwise, it was a good story to revisit and I enjoyed the narration. I shall continue with the series.

My First Encounter With Reacher

This is what it is. Lee Child isn't trying to be Cormac McCarthy. The story is fast-paced and the characters don't get on your nerves. There are 4 or 5 excellent and exciting set-pieces and the bad guys are really bad.

Some people claim that the first chapter is one of the best first chapters of any novel of the late 20th century. I don't know about that but it is certainly pretty good

Thought I’d try something new. So decided to go back 20 years with the first Jack Reacher story and I was not disappointed! Gripping from the get go - good reading performance (I’m quite fussy about the voices on Audible) and great continuous story I was never bored. So happy now as I have loads more to listen to

A great book however I'm must say as much as I love Lee childs passion for Jack reacher I feel that if it isn't narrates by Jeff harding then I simply cannot listen to it. The two go hand in hand. Jack reacher is simply fantastic

Very good book. hard to turn off and easy to listen to. Recommend this book to all those who like a good crime murder and a bit of mystery.

Being a Lee child can and having enjoyed his books both kindle and hardback, I was very disappointed with the narration of Killing floor. There were far too many she said, he said and I said interruptions to the narration which I feel could have been avoided with better editing. I shall continue trying Lee child books on Audible but will vet them with trial listening before purchasing

i said she said becomes really irritating! good story tho worth a listen. ..and first in the series

I have never heard a book read so badly! There is no inflection or tone. I had to give up half way through chapter 2. The narrator could be reading a shopping list or menu.

HE SAID, SHE SAID killed it.

He said, she said gets old really quick, couldn't listen for long because of it.

Tried really hard to like this book . I lasted 6 chapters . Badly written and even worse narration.
Obviously I'm in the minority. I've listened to many books but this is just about the very worst.
I will be asking for a refund

I was excited that I may have a new author to dive into. Unfortunately this book failed to deliver. The story line had potential but the quality of writing lets it down. It lacks polish, reads like an amateur author. The narrator becomes annoying not long into book. I struggled to continue. Not a book I would listen to again and would try the author again.

Yes, 'horrendous'. Just the biggest bunch of absolute bollocks I have ever attempted to listen to. As others have pointed out the "he said, She said" gets very tired by the second chapter, but the storyline is where this atrocity really shines. I am pulling the pin on this at the 4 hour mark and absolutely nothing has happened except 'Jack' has headbutted the biggest inmate he could find. Classic.

I truly wish I could have those 4 hours of my life back but at the very least it has given me insight into the Lee Child world, one I shall never return to.

The voice ruins the book

Sorry, but I just can't listen to the book. The voice is so flat with no emotion or feeling whatsoever..... I can't get into the story at all.... shame. really wanted to listen to these books.

Could not persevere into the book as the narrator was unbearable to listen to. I felt the sort my have been good and may keep trying just to hear the end. Definitely won’t buy more with this narrator though

Dreadful narration, couldn't get past 5 chapters

Slow, boring narration made the book very hard to listen to. The he said, she said is just terrible. Only lasted 5 chapters

The story is brilliant. Lee Child is a great story teller, with unguessable plot twists, and he writes in a way that makes for compulsive reading.

The narrator is dreadful. Each sentence is read out in the same way, with emphasis on the last few syllables, regardless of content or context. It's as if he has been giving a list of unconnected sentences to read out, and so he works his way down the list, in the correct order, but with no feeling or regard for the story.

Its a pity, Ive read quite a few Lee Child books, and I was looking forward to working my way through the Jack Reacher novels from beginning to end on Audible, but I don't know whether I can stand the poor narration. I wish Audible had chosen a decent narrator.

This is a great book and I can't wait to listen to the rest of them.

I love Lee Child and all his Jack Reacher books but I could barely listen to this narration. His accent wasn't at all like I'd expect an American Serviceman, who'd hardly stepped foot in America, to sound like. Also his portrayal of a feminine voice (Roscoe), well quite frankly, I found it insulting. Like a comedy example of a typical woman's voice.
Sorry. I'll stick to the books in future.