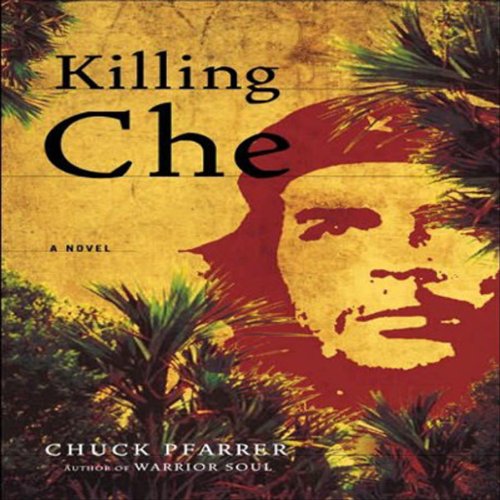 By: Chuck Pfarrer
Narrated by: William Dufris
Try for $0.00

A rich, complex historical novel in the spirit of Graham Greene and John le Carre, Killing Ché is a personal and political thriller that pits history's most infamous insurgent against a conflicted and world-weary CIA officer.

The year is 1967. Vietnam is in flames, and half a world away, few realize that a firefight on a jungle road in Latin America is the beginning of a new and secret war. In the Ñancahuazú Valley of Bolivia, international revolutionary Ché Guevara leads a band of guerillas determined to liberate a continent. Paul Hoyle, a CIA paramilitary officer, joins a team of operatives sent to crush the Bolivian insurgency. When a recovered backpack reveals that Ché Guevara is in command of the rebels, the stage is set for a duel between world ideologies.

This powerful, tragic story transports the listener into the heart of the Bolivian jungle and into a world of noble truth and glorious aspirations. Pfarrer writes of love and defeat, loyalty and betrayal, and the tragic death of an ideal.

At the center of the struggle are two complex women who may hold the keys to each man's destiny: Tania, Ché's crucial undercover operative and occasional lover who, unbeknownst to him, is a "deep placement" of the KGB; and Maria Agular, mistress of the Bolivian minister of information, whom Hoyle dares to trust with both information and his emotions.

Pulsing with action, populated by rich characters, and filled with authoritative and inside details from the author, a counterinsurgency expert, Killing Ché is a stunning recreation of a conflict that sealed the fate of one of the 20th century's most charismatic and controversial figures.

What listeners say about Killing Che

Should be a movie

"Killing Che" is an outstanding fictional account of Che's last attempt at revolution. The story is a balanced account told from both Che's side and the CIA, Special Forces and Bolivians involved.The book is very heavily based upon Che's Bolvian diary and recently declassified US government accounts and other texts. It is sympathetic enough not to offend Che idolizers (see Humberto Fontova's excellent book)and tactically and technically accurate enough to impress people with first hand knowledge of counterinsurgency operations.(It was written by a former USN SEAL.) No matter what your feelings about Che and his legacy, this book is totally absorbing and would make a great movie.

I devoured this book when it first came out some time ago, and enjoyed listening to the audio telling again just now. It's a sad and courageous story told with great detail and feeling by Chuck Pfarrer. Che is portrayed well without being made the villain or overly romanticized. He was a great man and a revolutionary with a dream, who bit off too much in the end. Even though I knew historically how the book had to end, Pfarrer's story is gripping and I still found myself hoping Che would win. :)

Pfarrer's character Hoyle is also an enjoyable facet of the story. The added romance to the tale made these characters human, I didn't find it tedious like some other readers. Pfarrer has a way of describing battle that is both technical and visceral.

William Dufris does a good job narrating, I enjoyed the voices he assigned the characters, and the consistency with which he delivered their lines. My only beef with the audio had to do with the spacing of the chapters, more a technical detail than to fault of writer or narrator. Pfarrer would end every chapter with a great one liner you want to chew on for a few moments and reflect on what's about to happen but IMMEDIATELY it jumps to the next chapter, sometimes almost interrupting the last word.

I love reading historical fiction, it is an entertaining way to learn some history. In this case, however, it is too much fiction. Hours of listening to some fictitious love story between Hoyle (ex-CIA) and Maria ?
Warning to those who enjoyed "Killing Pablo"

This was an interesting and entertaining read but the author really should acquaint himself with the true history of Che Guevara. The Publisher’s Summery described this book as a “complex historical novel”. I think not. A little research would have shown Guevara was Castro’s executioner responsible for at least 600 political executions. Had he succeeded in Bolivia, he may have ended up another Stalin or maybe Castro, two “great men of the people”. Although the Author didn’t glorify Guevara he did portray him as a victim.
Despite all this I gave a pretty good rating as this fictional story was entertaining and worth the money and time.

The story of this book is very good and the character development is excellent. It is even more compelling because much of the basic story is true, as I understand it, (though I do not know the history well enough to be able to discern which parts were fact and which were fiction).

The story gets bogged down just slightly at times by the authors needless use of metaphors/simile. I wish he had kept it a bit "cleaner". The narrator is decent, but for some reason felt compelled at times to over-dramatize the reading by exaggerating and stretching the words - "Hoyle mooooooooooved slowwwwwwwwwly toward the door." The story was dramatic enough to stand on its own without this embellishment and this detracted from the listening.

All told however, this is a well-written book, competently narrated, and worth the time to listen to.

Not bad, not great

This book reminded me of a black and white movie from the 50's or the early 60's. The writing wasn't bad and the narration wasn't bad. The "romantic sex" scenes were a bit too pedestrian for my tastes (a lot of "gazing into each other's eyes" and heaving bosom kind of stuff). It is a novel to be sure and not a work of non-fiction. It didn't elicit a big reaction out of me but I also listened to it until the end and didn't think it was horrible.

Good mix of fact and fiction

Would you try another book from Chuck Pfarrer and/or William Dufris?

yes this book was enjoyable with a mix of historical fact

The ending was known to me.

No the narrator was very good.

Was Killing Che worth the listening time?

Yes the book was worth listening and I would listen to again in the future.