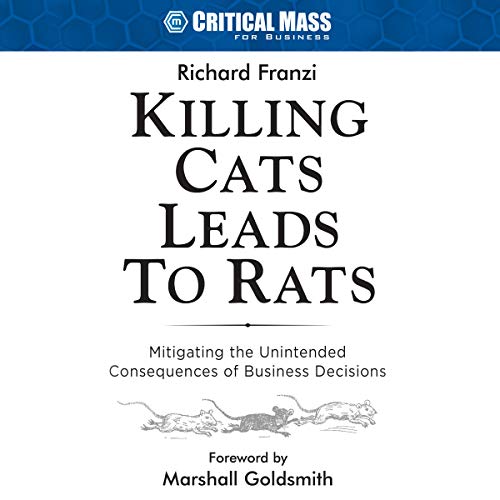 Killing Cats Leads to Rats looks at the unintended consequences of business decisions and includes examples from well-known companies including Pepsi, Wells Fargo, Target, Starbucks, Samsung, and Volkswagen. In his book, Franzi also reveals the five causes that lead to unintended consequences, along with six strategies to help mitigate potentially damaging results.

“Readers will gain insights that they can apply to their own businesses to help them evaluate potential unintended consequences in advance of decision making and also to find ways to mitigate undesirable outcomes before they get out of control,” said Richard Franzi, author.

The book’s foreword is by Dr. Marshall Goldsmith, the author or editor of 35 books, which have sold over two million copies, been translated into 30 languages and become best sellers in 12 countries. He is the author of two New York Times best sellers, MOJO and What Got You Here Won’t Get You There, a Wall Street Journal number-one business book and is the winner of numerous book and business coaching awards.

Much like Spencer Johnson’s Who Moved My Cheese? and Kenneth Blanchard’s The One Minute Manager, Franzi’s book delivers strategic insights that help business leaders think differently for greater success. The book’s title comes from the unintended consequence of killing cats to reduce the spread of the plague in the 1300s, which resulted in an increased rat population that actually increased the spread of disease.

It has good information and several good anecdotes. The narration is a little monotonous, but the regular humor helps keep you listening.