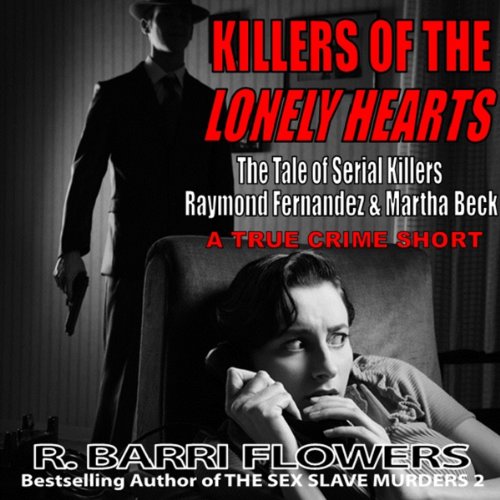 Killers of the Lonely Hearts

Killers of the Lonely Hearts

In this gripping tale of sex, jealousy, con artists, and murder, the author gets to the root of the violent crimes perpetrated by 1940s serial killers Fernandez and Beck, who preyed on lonely women through personal ads, stealing from them, and murdering them before the ultimate justice was served on the killer lovers.

As a bonus, included is a complete true crime short, "The Sinful Killers," about serial killers James Gregory Marlow and Cynthia Coffman, who murdered at least five people over three states in 1986, including four women, who were targeted for abduction, sexual assault, and robbery.

An added bonus is excerpts from R. Barri Flowers best-selling true crime shorts, "Mass Murder in the Sky", in which an airliner is brought down over Denver by dynamite and "Murder at the Pencil Factory", chronicling the century old murder of Mary Phagan and the lynching of her purported killer Leo Frank.

Also included are excerpts from the author's bestselling novel, Dark Streets of Whitechapel, a Jack the Ripper historical thriller.

Murders from the classifieds!

What made the experience of listening to Killers of the Lonely Hearts the most enjoyable?

This book was a good overview of the crimes of Raymond Fernandez and Martha Beck. It is a short book, and not in-depth, but it is good and gives the facts. At the end, there is a bonus of short previews of R. Barri Flowers other book, including a fiction novel based on Jack the Ripper. The short preview was quite intriguing. I did enjoy this book as well.

If you could sum up Killers of the Lonely Hearts in three words, what would they be?

What other book might you compare Killers of the Lonely Hearts to and why?

I am beginning to love these true crime shorts which are written by R Barri Flowers, and cannot wait to read more, they are incomparable because they are unique true crimes.

Killers of the Lonely Hearts had me hooked from the start. I had never heard of the serial killers Raymond Fernandez and Martha Beck, however I found their story fascinating.

It seems amazing in this day and age that people could be so innocent, however this was a totally different world, in the 1940’s, crimes such as these were virtually unheard of. The normal man or woman on the street would have had no idea that people could be so callous, cruel and deceitful, preying on lonely, vulnerable women and then steal from them, before murdering them.

The author also added a bonus true crime short The sinful killers which is another fascinating story about Gregory Marlow and Cynthia Coffman who killed at least five people in 1986.

And, if this is not enough, he has included two extra tasters. The first is an excerpt from Mass Murder in the Sky, another of his best-selling true crime shorts. The second is from his novel Dark Streets of Whitechapel, about probably the most famous serial killer of all time Jack the Ripper.