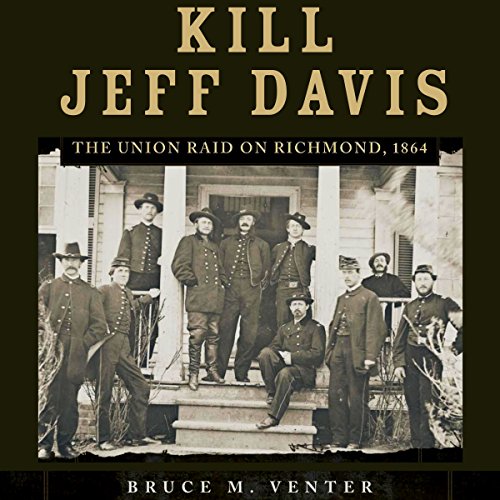 The ostensible goal of the controversial Kilpatrick-Dahlgren Raid on Richmond (February 28 - March 3, 1864) was to free some 13,000 Union prisoners of war held in the Confederate capital. But orders found on the dead body of the raid's subordinate commander, Colonel Ulric Dahlgren, point instead to a plot to capture or kill Confederate president Jefferson Davis and set Richmond ablaze. What really happened, and how and why, are debated to this day. Kill Jeff Davis offers a fresh look at the failed raid and mines newly discovered documents and little-known sources to provide definitive answers.

In this detailed and deeply researched account of the most famous cavalry raid of the Civil War, author Bruce M. Venter describes an expedition that was carefully planned but poorly executed. A host of factors foiled the raid: bad weather, poor logistics, inadequate command and control, ignorance of the terrain, the failures of supporting forces, and the leaders' personal and professional shortcomings. Venter delves into the background and consequences of the debacle, beginning with the political maneuvering orchestrated by commanding brigadier general Judson Kilpatrick to persuade President Abraham Lincoln and Secretary of War Edwin Stanton to approve the raid. Venter's examination of the relationship between Kilpatrick and Brigadier General George A. Custer illuminates the reasons why the flamboyant Custer was excluded from the Richmond raid.

A great story! Excitement, intrigue, harrowing escapes, a mystery, all well told in this story of a Union cavalry raid on Richmond, Virginia. Not to be missed.