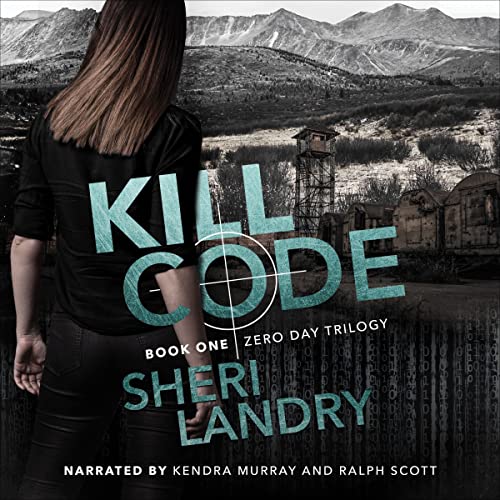 By: Sheri Landry
Narrated by: Kendra Murray,Ralph Scott
Try for $0.00

A hacker on the run

And the code she needs

Locked away with her missing memories.

When a hacker on the run is captured after 10 years, she has no choice but to recover the code she needs to stop an obsessed madman who has been hunting her but it is hidden in the one place she can't hack into, her own mind.

Hunted from both sides of the law, Jessa is a hacker in hiding in this chilling action-packed thriller that starts in the first chapter and never lets up. As secrets and missing memories surface, not everyone will end up on the same side they started on.

Years of hiding taught Jessa to trust no one. Left to fend for herself after a violent attack a decade earlier killed her family, she’s resorted to working highly illegal hacking contracts. But when she is captured by the man she thought had vanished, Jessa fears her former ally may have betrayed her.

Special Operations Agent Jack never got over the death of the woman he loved while working undercover. Horrified to learn she survived only to endure brutal torture at the hands of a vicious criminal mastermind, he worries he won’t regain her confidence. But with a deadly rival closing in, the determined operative will have to pull out all the stops to protect her from more heartless violence.

Backed into a corner, Jessa is forced to place her faith in Jack to help her recover the suppressed memories key to nailing their mutual adversary. But with her deeply ingrained trauma, Jack fears it could cost her what’s left of her sanity when the fine line between justice and vengeance blurs.

Explicit Content Warning: Kill Code is a dark suspense containing a past recollection of the torture and assault of an adult female character.

What listeners say about Kill Code

This was my first Luna Kayne's book, and won't be my last. This is the first book in the Zero Day Trilogy, a Dark Romantic Suspense. Jessa and Jack's story is suspenseful, action packed, and filled with twists and turns. The storyline is intricate, and captivating. Impossible to put it down. Ralph Scott and Kendra Murray did a great job with the narration. Looking forward to listen to the next book in the Series. I was given this free review copy audiobook at my request and have voluntarily left this review.

It started off a bit slow but I’m so glad I stuck with it as it’s amazing . I couldn’t stop listening it was so good Jessa has been through hell and back and she’s reunited with her first love Jack. She puts everything on the line to get revenge on the one man who killed her family and then tortured her to try and make her bow down to him. There are some triggers which were a little upsetting but it’s such an amazing story it wouldn’t have been as powerful if they were left out.

This is my first book by Luna Keyne, and, my goodness, it was fantastic. It is a careful blend of suspense, thrilling action, romance and more. The characters are richly complex, strong and yet vulnerable. The plot is so cleverly developed that the suspenseful elements are exposed in fractions designed to entice the audience. (I will admit to being completely enticed!) There were even a few darker moments in this book that were quite difficult to listen to. And there were moments that held me on the edge of seat, both eager for and a little scared of whatever was coming next. Really thrilling!

I don't want to give away anything except to say that I enjoyed the experience of this book. The narration was good. I thought that Kendra Murray was particularly well chosen to narrate Jenna's character and point of view.

I am so thrilled this is a trilogy. I am looking forward to k whatever happens next.